In this article, you will learn and get code about printing of ASCII value(s) of a character, all character or all character in a string (given by user at run-time). So here are the list of programs, you will go through over here:

ASCII stands for American Standard Code for Information Interchange. It is a character encoding standard for electronic communication.

Print ASCII Value of a Character

The question is, write a program in C that receives a character as input and prints its ASCII value as output. The answer to this question is:

Now supply any character say A and press ENTER key to get the its ASCII value:

initializes the ASCII value of a character (stored in ch variable) to i. Because i is of int (inter) type. Therefore, ASCII value of ch gets initialized to i. Print the value of i.

Print ASCII Value of all Characters

The question is write a program in C that prints ASCII value of all characters. Here is its answer. In this program, without initializing the character to integer type variable, we've just printed the value using format specifier.

If you run the above program, you will see the output like: 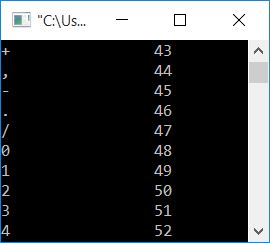 Above snapshot is just a small part of output produced by the previous program. Because, there are 254 characters gets printed, so we're not able to show all at once, therefore you have seen the above output of showing just small things of the output.

Print ASCII Value of all Characters in a String

The question is write a program in C that receives a string as input and prints ASCII value of all the characters of given string. Here is its answer

Let's suppose, after running the above program, user has entered codescracker.com as string input. Therefore here is the output produced by above program: 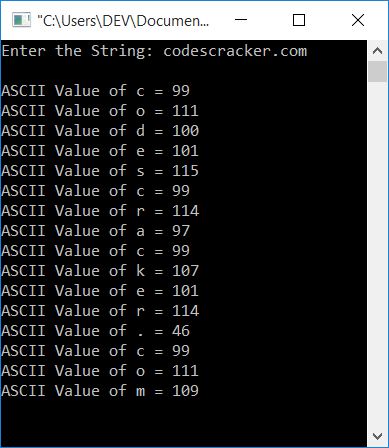