In this article, you will learn and get code about how to add n numbers (n integer numbers, n real numbers, and n natural numbers) in C programming. Here n indicates the amount/quantity. That is, how many numbers, user wants to enter and add them as shown here.

To add n numbers in C programming, you have to ask from user to enter the value of n, then ask to enter n numbers to perform the addition of all the provided n numbers (by user). And then display the addition result as output on screen. Let's take a look at the program.

This program was written under Code::Blocks IDE. Here is the initial snapshot of sample run: 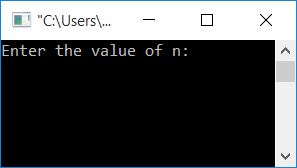 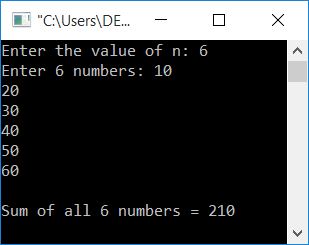 Steps used in above Program

Some of the main steps used in above program are:

What if User enters Decimal Numbers ?

The program given above is correct only when user supply all the numbers in integer form (without any decimal). So here is the modified version of the above program that is correct for both integer and decimal numbers.

This program is applicable to find the sum of all n real numbers.

Here is the snapshot of first sample run. In this sample run, we have provided all the numbers as integer value: 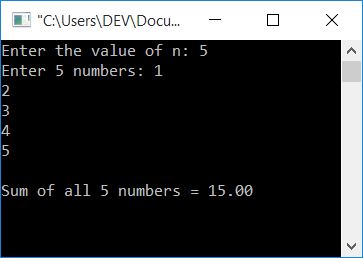 And here is the snapshot of second sample run. In this sample run, we have provided all the numbers as floating-point value: 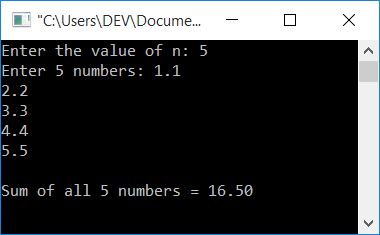 In above program, we only done these changes:

As we all knows that positive numbers from 1, 2, 3, ... are natural numbers. Therefore here we only have to ask from user, the value of n, that is upto how many term, the natural number continues, and find sum of that natural number.

Here is the snapshot of sample run: