C Program to Write Data into a File

In this article, you will learn and get code for writing some data into a file inside the current directory.

The function fopen() is used to open the file. It takes two arguments: the first one is the name of the file, and the second one is its opening mode. To write some data into a file, we have to use the "w" file opening mode. For example,

opens a file named "codescracker.txt" in the writing mode.

What if the file doesn't exist?

While opening the file using "w" file opening mode, if the file doesn't exist, a new one gets created. Therefore, using the above statement, if the file "codescracker.txt" does not exist inside the current directory, then it gets created. The current directory is the directory or folder where you are saving your C programs, or the folder in which the program for writing data into a file is saved.

Write data into a file in C

The question is: write a program in C to ask the user to enter the name of a file to open the file, and then again to enter the data to store inside the file. The answer to this question is:

This program was built and runs in the Code::Blocks IDE. Here is its sample run:

Enter the filename, for example, "codescracker.txt," and press the ENTER key. If the file entered by you, say "codescracker.txt," doesn't exist inside the current directory, then it gets created there. The current directory means the directory where you have saved your program, as given above. Now enter some data one by one in a way that, if you want to enter the data for three lines, then enter like this:

Enter every time you start a new line or sentence. If you want to stop writing data into the file, then just press the ENTER key without writing anything before it. Here is its sample run:

As you can see, I've written three lines of data; therefore, a file named codescracker.txt gets created inside the current directory, and that file contains: 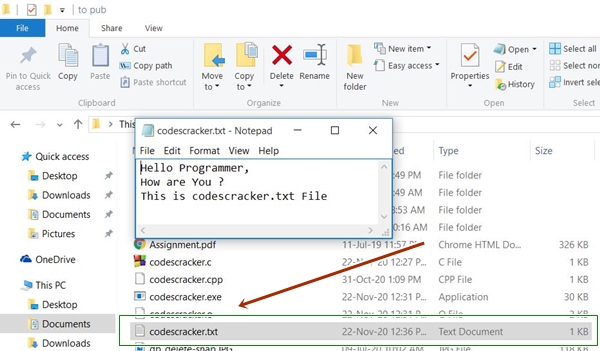 Modified Version of the Previous Program

Assume the user types in a file called codescracker.html that does not exist in the current directory. The following is a sample run of the above program. This is the initial output:

Enter the file's name, say codescracker.html, and press the ENTER key. Because this file is not available in the current folder, a new file gets created, and here is the sample output you will see: 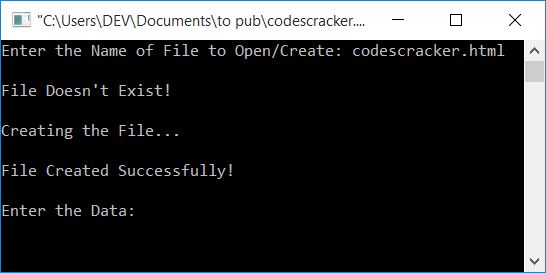 Now, enter the following information into the file codescracker.html:

The above data must be entered in such a way that you first enter the first line, that is:

and then press the ENTER key; enter the second line, which is:

and then press the ENTER key once more. In similar fashion, enter the next two lines. Here is the sample output: 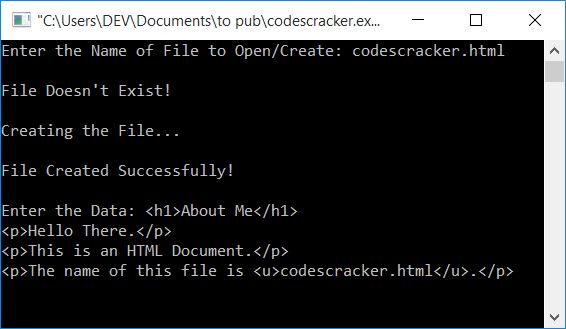 After entering all four lines of data, press ENTER without typing anything to stop writing the data into the file. Here is the output you will see after doing it: 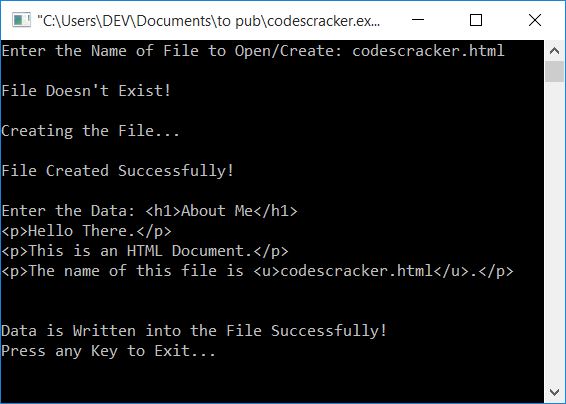 Now press any key to exit the program. Here is a screenshot demonstrating that the file codescracker.html has already been created using the aforementioned program, within the current folder, of course:

Because it is an a.html file, when you open it in a web browser like Google Chrome, it displays: