In this tutorial, you will learn and get code about the printing of prime numbers in the following ways:

But before going through the program, let's first understand prime numbers.

What is a prime number?

Print prime numbers from 1 to 50

The question is, "Write a program in C to print all prime numbers from 1 to 50." Here is its answer:

As the program was written in the Code::Blocks IDE, here is the sample run after a successful build and run: 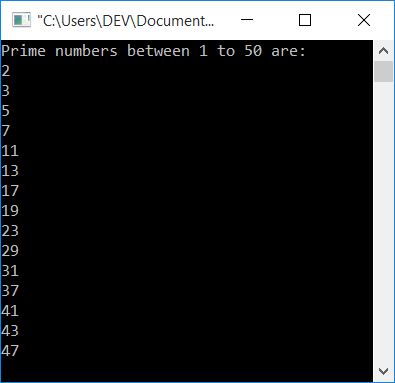 Now let's modify the above program by adding some extra features. In this program, we've added a feature that allows the user to specify the range in which all prime numbers should be printed. That is, this program will ask the user to enter a starting number of 10 and an ending number of 100 to print all the prime numbers present between these two numbers, 10 and 100, as shown in the program given below:

Here is the first snapshot of the sample run:

Now supply any number, say 10 as the starting number and 100 as the ending number, to print all the prime numbers present between these two numbers as shown in the second snapshot of the sample run: