In this article, you will learn and get code about finding HCF of n numbers. But before going through the program, I recommend you to visit Find HCF of Two Numbers once (if not visited). Because, the program given here is relatable to the program in that article.

Now let's create a program to find HCF of all the numbers given by user at run-time.

This program was build and run under Code::Blocks IDE. Here is the sample run: 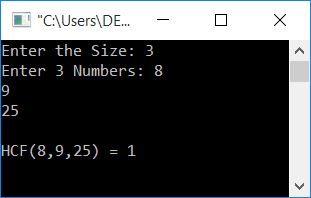 Here is another sample run for 2 numbers: 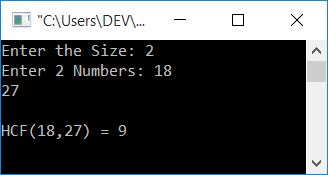 This program is same as of previous program LCM of n Numbers in C. Except we have reverse the condition of if block from:

and the statement from:

Why these two is reversed is discussed in LCM & HCF of Two Numbers in C. The brief description is: