To understand where this formula came from, refer to Leap Year Formula Explained. Now let's move on and implement it in a C program.

Now, I'm sure that you have a complete understanding of what the leap year is and how it gets calculated. So it's time to apply it to the program:

This program was compiled and executed using the Code::Blocks IDE. Here is the first snapshot of the sample run:

Supply any year, say 2100, as input and press the ENTER key to see the output as shown in the snapshot given below:

It is a very simple program, and you can easily understand it as all the logic used behind leap year is described in the beginning of this article. So let's move on to another program using functions.

This program will continue checking for leap years until the user wants to terminate it. Because we've added some extra code here, the user can now check the leap year any number of times at once. To check for leap years, this program uses a function. Let's have a look at it:

Here is a sample run of the above program: 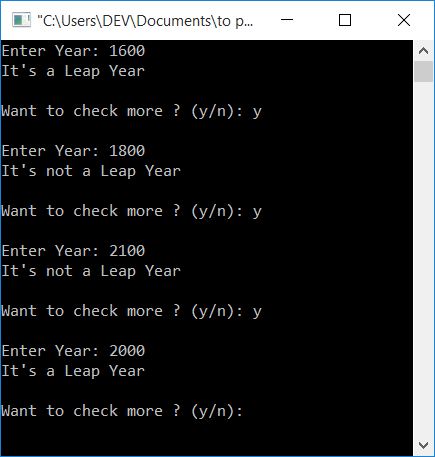 In this way, you can continue checking until you want to terminate. To check for another year, simply press y (yes) and enter the year. And to terminate it, just enter n (for no) or any other character except y.

Note: Use space before scanning the character as input because the %c conversion specifier won't automatically skip any leading whitespace. So, from the previous entry, if there is a stray newline in the input stream, the scanf() call will consume it immediately.

So here we have used:

as a statement about scanning a character. Because the blank is in the format string, it tells scanf to skip any leading whitespace.