Before start to write a program in C that counts total number of characters, spaces, tabs, and newline present in any file inside the current directory. Here current directory means the directory where your C program files are getting saved.

Now put this file inside the current directory.

Here is the snapshot of the file codescracker.txt in which all the above texts are written (that is of 4 lines). In this screenshot, you can also see that the file is saved inside the current directory: 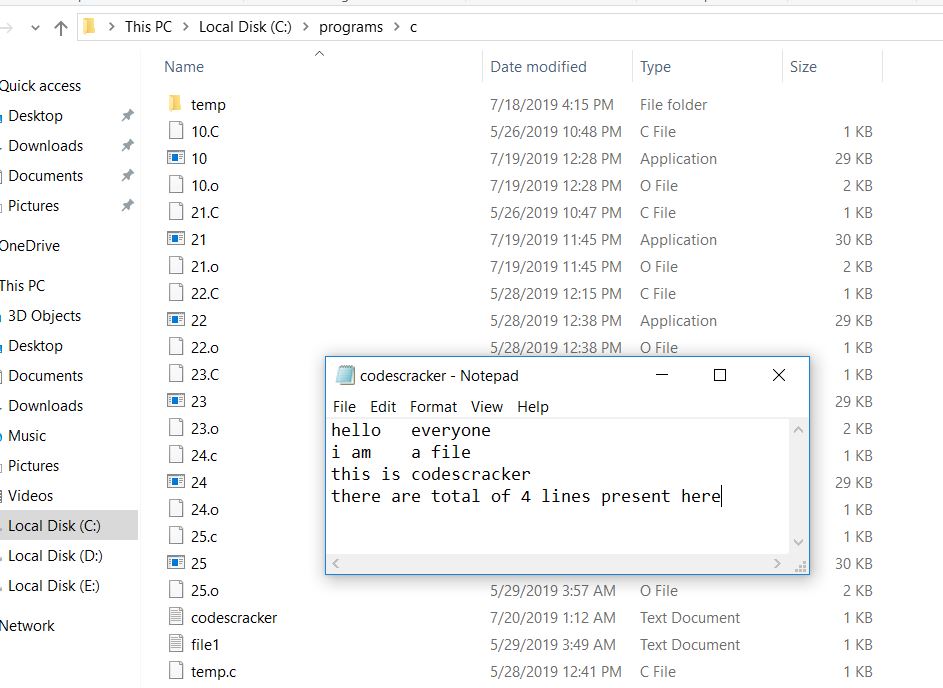 Now here is the program that counts characters, spaces, tabs, and newline present inside the file that was created earlier named codescracker.txt. You can also create any file to count these things for that file. Or you can also enter any filename that already exists inside the current directory:

As the above program is written under Code::Blocks IDE, therefore after successfully build and run, here is the sample run. This is first screenshot:

Now enter the name of that file with extension that has created in the current directory and press enter key. If you will also create the same file with same content, then here is the second screenshot of the sample run that you will also get on your output screen:

As you can see that the program shows total number of characters, spaces, tabs, and newline present in the file codescracker.txt.

As you can see, the program also prints the total number of characters, tabs, spaces, newline present inside program that you have written and saved.

Note - Before typing your current program name as filename, be sure that you have saved your program.

Here are some of the main steps used in the above program:

You can also add some more lines of codes to count extra things like vowels, numbers etc. Let's create another program with some extra lines of code along with its sample run. The question is, write a program in C to count following things inside any file entered by user at run-time:

The program given below is the answer to this question:

After successfully build and run, here is the first screenshot of the sample run of above program:

Now enter any file name. Let's enter the current filename, where we have written and saved our current program, that is test.c in this case and press ENTER key to see the following output: 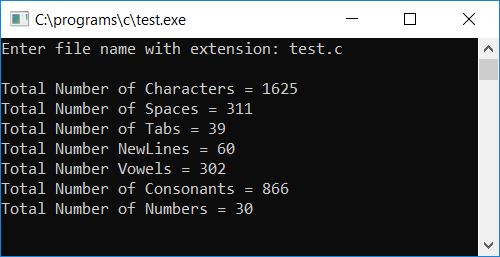