In this tutorial, you will learn and get code about sorting of given names by user (at run-time) in alphabetical order. For example, if user provides following 5 names as input:

Then the output will be

As you can see, all the 5 names gets arranged in alphabetical order (ascending). Let's move on and implement it in a C program.

The program was written under Code::Blocks IDE, therefore after successful build and run, here is the sample run:

Now supply any five names as string and press ENTER key to see the string with its each word sorted in alphabetical order as shown here in the second snapshot. 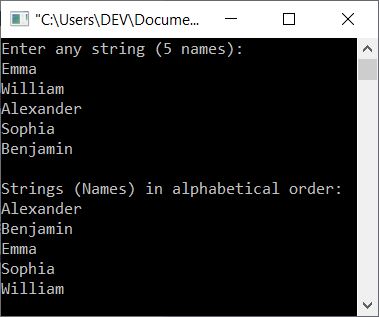 As the function used here to get the string input from user is scanf(), therefore you can also provide all the 5 names as string in one line say Emma William Alexander Sophia Benjamin. Here is the final snapshot of the sample run in this case: 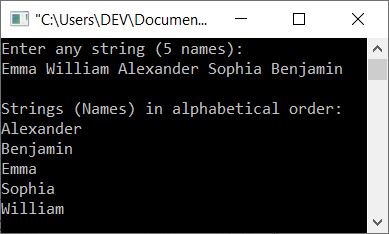 Here are some of the main steps used in above program: