In this article, you will learn and get code about adding of two numbers in C using pointer. So the question is, Write a program in C that adds any two number entered by user (at run-time) using pointer.

Here we will only discuss about brief explanation of pointer while adding any two number in C. To learn Pointer in detail, then refer to Pointer in C tutorial. Let's take a look at the program first, then will explain it further.

To add two numbers using pointer in C programming, you have to ask from user to enter any two number, then perform the operation using pointer as shown here in the following program:

This program was written under Code::Blocks IDE. Here is the initial snapshot of sample run:

Now supply any two number as input say 10 and 20 and press ENTER key to see the output as shown here in the snapshot given below:

In above program, there are two important operators. The & (ampersand) and * (star) operator. The & is called as address of operator, and * is called as value at address operator.

Here is another program, that provides you the full understanding about pointer after watching its output carefully. Let's take a look at the program:

The output of above program is shown in the snapshot given below: 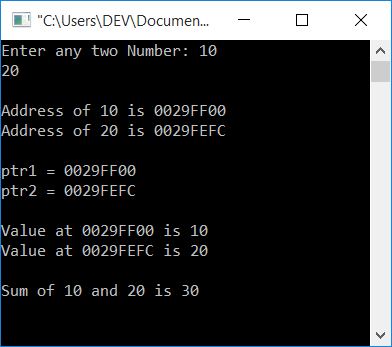 The format specifier %p is used for the standard notation of memory's address.