In this article, we will learn how to create a program in C that will ask the user to enter any number (at run-time) as input and find and print all the factors of that given number as output. Here is the program:

The program was written in the Code::Blocks IDE, and here is the sample run after a successful build and run. This is the first snapshot of the sample run:

Supply any number, say 24, to see all the factors of 24 after pressing the ENTER key: 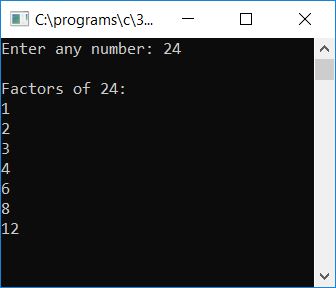 Here are some of the main steps used in the above program:

Now let's modify the above program in such a way that the program will print the total number of factors in a number-wise list. Here is the program. The question is: write a program in C to print all the factors of any given number given by the user at run-time. For example, if the user has provided 24 as input, The output must then look like this:

The program given below is the answer to the above question:

The following is the final snapshot of the above program's sample run: 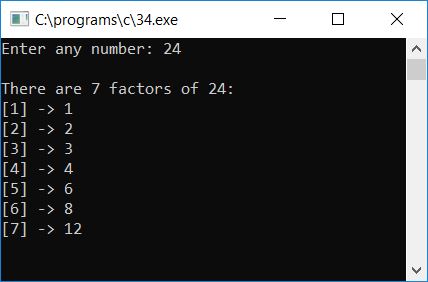