C Program to List All Files and Subdirectories in a Directory

Print the names of files and folders in a directory

Here is a C program that will print out all of the files (without regard for extension) and folders in the directory where the source code is saved:

This program was built and runs in the Code::Blocks IDE. Here is its sample run: 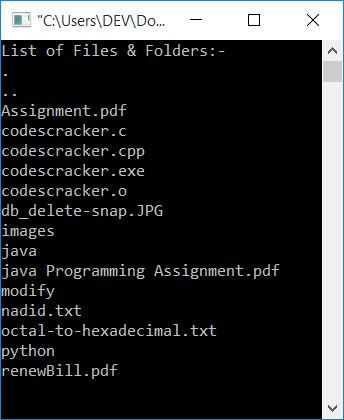 Note: The function opendir() returns NULL if anything strange happened while opening the directory.

And the function readdir(dr) reads the name of files or folders using the dr pointer of the DIR type.

The function readdir(dr) is implemented using the for loop, its return value is initialized to d, and it is checked whether d is equal to NULL or not. It returns NULL if anything strange happened while reading the directory (strange may be in the form that no files or folders were found or remain to be read). Whenever it is equal to NULL, program flow exits from the loop and closes the directory using closedir (dr).

Using a while loop, print the names of files and folders

Let's create the same program using a while loop.

It will produce the same output as the previous one. Here is its sample run: 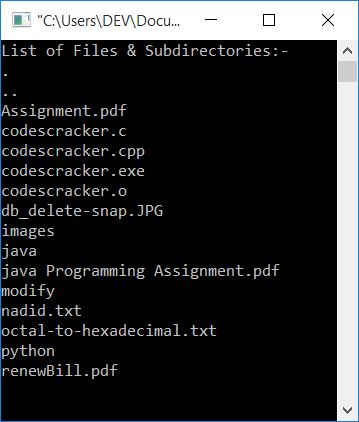