Things to Do Before the Program

Before going through the program, let's first create three files (inside the current directory), namely:

All the above files must be saved in a directory where you are saving your previous programs or going to save the program given below. Put the following content inside the codes.txt file:

And then put the following content inside the cracker.txt file:

The third file, named codescracker.txt, is empty (has no content).Because the program given below merged the content of both files, namely codes.txt and cracker.txt, into it, Because I save my source code file in a folder called "c Programs" in its parent directory, Documents on my computer's C-Drive. So here's a screenshot of the "c Programs" folder: 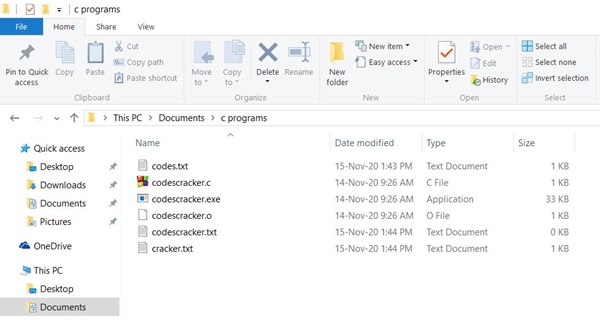 Now let's move on to the program given below.

C: Merge the content of two files into a third file

The question is, "Write a program in C to merge two files and write it in a new file." The answer to this question is:

This program was built and runs in the Code::Blocks IDE. Here is the initial snapshot of its sample run:

Now enter the names of two source files named codes.txt and cracker.txt that were created at the beginning of this article. And then enter the name of the target file, codescracker.txt, to copy the content of both files into this file. Here is the sample run:

If you open the file codescracker.txt, you will notice that the contents of both files have been copied into it.

The "r" file opening mode is used to open the two source files codes.txt and cracker.txt in reading mode.We only need to read the content of these two files.

The target file codescracker.txt is then opened in writing mode with the "w" file opening mode. We have to write something (the content of both source files) into it.

What if the file doesn't exist?

If a file does not exist or you do not have permission to access it, the function fopen() returns NULL. Therefore, before starting the operation, we checked whether it returned NULL or not. If it returns NULL, then print an error message; otherwise, continue the merge operation.

If all the content gets read, then at last, the fgetc() function will return EOF (End-Of-File). So here also, we have compared whether the value of ch is equal to EOF or not. If it is not equal to EOF, then continue putting the character; otherwise, exit the while loop.

Note: After performing all the operations related to the file, be sure to close its pointer using the fclose() function.