Java programming is a language that is still dominating the android world. There are almost tons of famous android applications written in Java. Some world-famous applications uses Java are Google, Amazon, LinkedIn, Uber, Spotify etc.

I know as a programmer, to learn a language efficiently. We need to take practicals as more as possible. Therefore, I've written around 1000 codes in Java here, separated in more than 100 Java program articles.

Since there are a lot of programs, I've written in Java. And of course, all those programs can not be included in a single page article. Therefore I've divided those programs in separate articles.

This is basically the home page of Java programming examples. All the program written here are well-tested and executed using/under one of the most famous Java IDE named Apache NetBeans IDE. This series of Java programming examples, are designed, while taking care of beginners too. So that, in most of the article, first I've included the basic version of the code, then written the complete version of the same program.

Now before starting the series of Java programming examples, let's first take a look at some of the basic Java programs along with its explanation.

The Java program written below, is the form of a very basic and simplest program that can be written in Java. Let's see the code, and its output. Then its explanation, to get some idea about, what is going behind the code written in Java.

This program produces the output as shown in the snapshot given below:

In above program, the following code:

tells that a class named CodesCracker is defined using the keyword class. This class is declared public, using the public keyword. Here public is an access modifier. Declaring the class as public, means the class CodesCracker is accessible to all. And the following code:

refers to the definition of main() method. Every Java program must have this method. The execution of the program, starts from within the main() method.

Using the method as static type, means that we need not to create an object to invoke the method. And of course, the main() method is to be called without any object, therefore it is defined using static. And the keyword public is again an access modifier.

And the String[] args indicates to an array of a sequence of strings that are passed to the method main(). This happens, when the program is executed. For example, if you execute the Java program using/via the command line:

The above program, can also be written as:

You'll get the same output as of previous program's output.

Now in short if I say, then every Java program contains a main() method, inside the class, with name, same as Java application or program's source code name, that is:

where CodesCracker is the name of the class. In your case, the only change may occur, is this name. Other things would be same. And in the section // your Java codes goes here, you'll write your Java code to do the job, whatever you want. Now let's take a look at some more Java program examples, given below.

This is the second version program written in Java. This program uses loop to execute a statement, multiple times.

The output produced by this Java program will be:

a variable i gets defined, which is of int type. And initialized with a value 0. Now while entering into the body of the loop, every time the compiler checks the condition of the loop. That is, the second statement (condition-checking) gets executed.

the value of i gets incremented by 1. So i=1 now. As already told, before entering into the loop, the condition-checking statement (second statement), gets evaluated. Since i<10 or 1<10 again evaluates to be True, therefore program flow again goes inside the loop, and prints the new value of i. That is, 1 this time. This process continues, until the condition evaluates to be False.

Now let's create another program in Java, that receives the name of a user, and prints some string on the output, along with the entered name:

The snapshot given below shows the sample run of above Java program, with user input James as name: 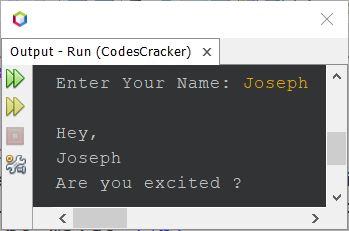 In above program, the \n used in the second System.out.println() statement, is an escape sequence. That inserts a newline to the output screen, so that the next output things, will get printed from next line. Therefore, the string Hey gets printed, one line after the user input. Also from above program, the last three System.out.println() statements can be written as:

That is, in above statement:

is comprises of three strings, the first one is:

which is the string itself. And the second one is:

which is indirectly equals to "Joseph" entered by user, according to the sample run given above. Since the entered string is stored in name variable. Therefore, where ever you write name inside the main() method, it evaluates to be "Joseph". And the third one is:

which is itself a string. And using the + operator, I've added all these three strings. So the output will be same as of previous program's sample run.

The output produced by above Java program will be:

This is the same program as of previous. The only difference is, the value of three variables, are received by user at run-time of the program:

The output produced by above Java program, with user input 10, 20, and 30 as three numbers, is shown in the snapshot given below: 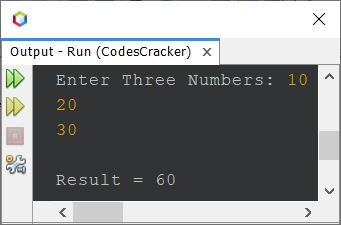 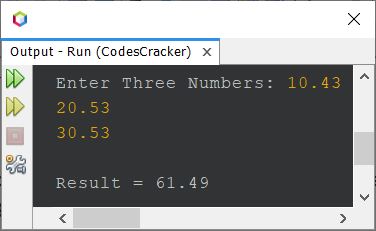 Here is another program written in Java, that receives two values of different types.

The sample output produced by above Java program with user input Mark as name or string and 10 as value of n is shown in the snapshot given below: 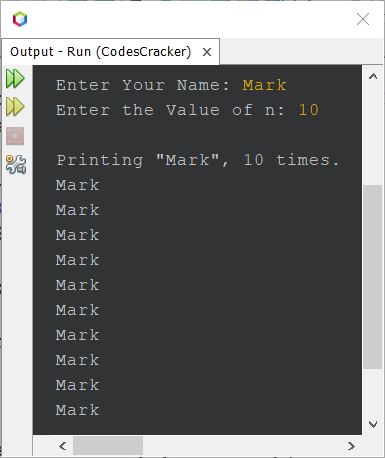 Above seven Java program examples are written to show you the demo, that how the program can be written in Java. Now from next, one by one, you'll get much more programs written in Java in different-different ways.