In this tutorial, we will learn about how to find and print factorial of any given number with and without using function. Here we have also created a recursive function to find out the factorial of any number. Here are the list of programs you will go through:

But before starting these programs, let's understand how factorial of a number gets calculated.

How to Find Factorial of any Number ?

To find factorial f of any number say n, use the formula

For example, find factorial of 5, using the above formula

Find Factorial of Given Number in C

To find the factorial of any given number in C programming, you have to ask from user to enter the number. Now find the factorial of that number using above formula as shown in the program given below. As you can see from the formula, if a number is n, then multiplication gets occurred for n times.

Or for example, if 5 is the number, then multiplication gets occurred 5 times, that is 5*4*3*2*1. So here it is required to create loop that runs n number of times

As the program was written under Code::Blocks IDE, therefore after successful build and run you will get the following output:

Now supply any number say 5 and press ENTER key to see the factorial of 5 as output as shown here:

This program does the same job, but using user-defined function findFact(). To learn about function, then refer to its separate tutorial where you can go for its in-depth tutorial.

Here is another program that will calculate the factorial of any given number using recursive function:

Here is the final snapshot of the sample run:

If you are not satisfied with above explanation. Then I recommend you to refer Recursion in C tutorial. There you will of course understand all about it, that how recursion works.

Find Factorial of all Numbers in Given Range 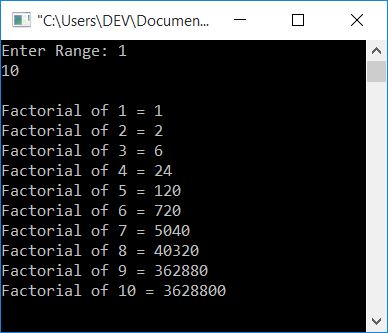