How to Find LCM

LCM stands for "Least Common Multiple." It is used to find the smallest positive integer that is divisible by all the numbers (from which the LCM is computed). For example, the LCM of 2 and 3 is 6, as indicated by:

As you can see, the number 6 is divisible by both the numbers 2 and 3. LCM (Least Common Multiple) can also be called:

Both expressions mean the same thing, which is to locate the smallest number such that it can be divided by the numbers that are provided (to which the LCM is to be calculated).

However, there is another method we can approach to find the LCM of a given set of numbers. Let's discuss.

To find LCM, there are multiple methods available. But here, we will only discuss two popular methods:

To find LCM using the listing multiples method, we have to follow the algorithm given below:

Since 60 is the least common multiple of all the multiples of three numbers, Therefore, the LCM of 10, 12, and 15 is 60, which can be written as follows:

This method of determining LCM is undeniably popular. It is also the easiest way to find out the LCM of two or more than two numbers. So, here is a step-by-step solution for finding the LCM of 10, 12, and 15 using the ladder method: 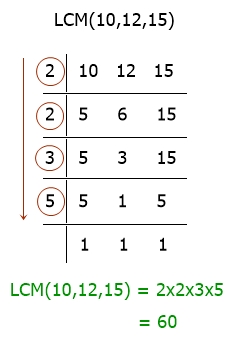 I hope you are familiar with the above method. If you're not, then here are some main steps:

Programs on LCM of numbers in different languages