In this article, you will learn and get code in Python, to shutdown or restart the computer system. Here are the list program programs available over here:

Note - All python programs (on Shutdown/Restart) given in this article, are well-tested and executed. Therefore be sure to save all documents before executing any program given here.

Caution - Make sure to save and close all documents before executing any program given below. Because after executing these codes (programs), your system gets shutdown/restart and you can lost your unsaved documents.

To shutdown or restart your computer system (PC or laptop) using a python code, you have to first import the os library and then use os.system() in this way:

to shutdown the system. Replace /s with /r to restart the system. Now let's create the program in Python to do the task.

Note - Close all documents before executing this program.

Note - The os.system() method is used to execute a command in a subshell. Here, the command is of string type.

To shutdown the system immediately, provide the timer as 0 second. So that the system gets shutdown within 0 second or immediately as shown in this program:

Note - The /t 0 is extra code added in this program (than previous one). Here /t stands for timer and 0 indicates 0 second. Therefore after executing this program, system gets shutdown within 0 second.

Shutdown Computer in Given Time

This program asks from user to enter the number of seconds to set the timer to shutdown the system:

Here is the initial output produced by this python program:

Now enter the number of seconds say 10 to shutdown the system in 10 seconds.

Note - The str(sec) is used to convert sec (an integer type value) to string. Because to use + operator to concatenate two string values. That is, strOne and strTwo. The second string is the timer value entered by user.

This python program restarts your computer in 0 second or immediately:

Restart Computer in Given Time

This program is same as the program given in shutdown computer in given time section. The only thing to do is, replace the following statement:

Note - Just a matter of s and r, the whole program gets changed.

Shutdown & Restart based on User's Choice

Here is the combined version of both programs, that is shutdown and restart program in python.

This python program asks from user to enter the choice to perform the desired action. That is, choices are given to perform the things such as shutdown immediately, shutdown in given time, and so on as shown in the program given below:

Here is the snapshot of the above python program, giving user, five options to proceed, what he/she wants to do. That is, either shutdown, restart or exit from the program: 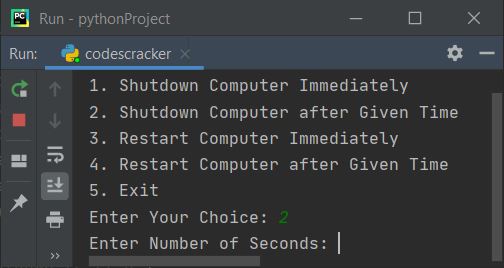 Now enter the input say 180 to shutdown the system after 180 seconds or 3 minutes.

To shutdown linux based system using a Python program, here is the code:

This program shutdown the linux based system immediately.