Python Program to Count Words in a String

This article is created to cover some programs in Python, that count and prints total number of words available in a string entered by user at run-time. Here are the list of approaches used to do the job:

To count total number of words present in a given string or sentence in Python, you have to ask from user to enter a string, then count and print total words available in the string like shown in the program given below:

Now supply the input say welcome to codescracker as string and press ENTER key to count and print the total number of words available in the given string: 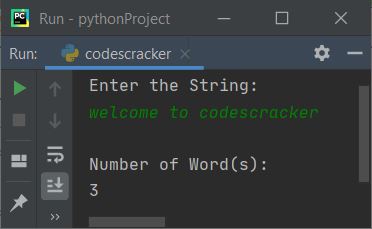 Here is another sample run with following user input: 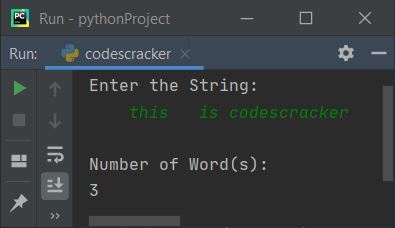 Note - The len() method returns length of string passed as its argument.

In above program, the following code (for loop's code):

The dry run of above program with string input welcome to codescracker, as provided in first sample run, goes like:

This program also count and prints total words available in a string, but using predefined function named split(). The split() method splits string into words. Let's have a look at the program first:

Here is its sample run with user input, This is Python Program:

From above program, the following code (statement):

can also be replaced with the block of code given below, to make it more understandable:

that is, the first statement creates a list of words using split(). And the second statement initializes the length of list named wordlist using len() method. Length of list means, total number of elements available in the list. Elements of list here are words

This is the last program created using a class named CodesCracker. Class is an object-oriented feature of Python. Function inside a class, is called as its member function.

To access member function of a class, an object of that class is required. Therefore an object named ob of class CodesCracker is created, and using dot (.) operator, I've accessed its member function through its object like shown in above program.