This article is created to cover one of the famous program in Python, that is multiplying two binary numbers entered by user. Here are the list of programs covered in this article:

The question is, write a Python program that multiplies two binary numbers entered by user at run-time. The upcoming program is answer to this question:

Now supply inputs say 1101 as first and 101 as second binary number, to multiply these two given binary numbers and print the multiplication result on output as shown in the snapshot given below: 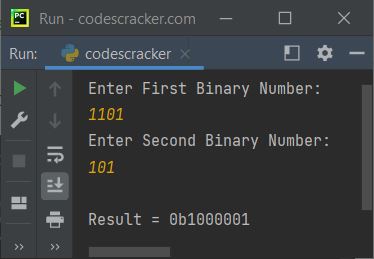 This program is the modified version of previous program. The end used in this program, is to skip insertion of an automatic newline using print(). The str() converts from any type to a string type. The int() method converts into decimal number format.

Here is its sample run with user input, 111 as first and 11 as second binary number: 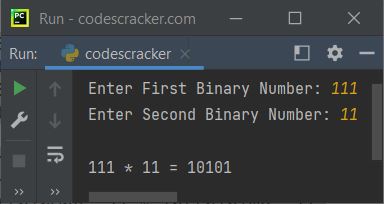 This is the main program of this article. Proceeding anything in a programming world using self-created or user-based code is better way to learn the things. That is using any pre-defined function to do the task will not allow you to learn more. Rather it is like remembering the things.

But using or understanding user-based code to do the same task gives you more and deep understanding about the logic, processes, loops, and all that in a better way. So always try to create user-based code for each and every task. Like this program multiplies two binary numbers entered by user, using self-created code by one of the codescracker programmer. Let's have a look at the program and its sample run:

Here is its sample run with user input, 110 as first and 10 as second binary number: 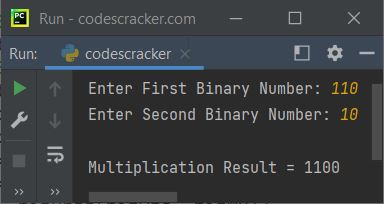