By the end of this course, you will have a firm grasp on the fundamentals of operating systems, including their purpose, operation, and significance in the modern technological landscape 😀.

Furthermore, you will have an appreciation for the technical jargon commonly employed while discussing or implementing an OS.

What Should You Master Before Attempting to Learn an OS?

While a foundational understanding of computer systems is not strictly necessary before beginning an operating system tutorial, it will likely make the process more enjoyable. This tutorial series will teach you all there is to know about operating systems (OSs).

The goal of this guide is to provide a basic understanding of operating system concepts to anyone with an interest in computers.

If you want to learn a lot about operating systems, this lesson will show you the ropes. Let's start with an introduction to it.

A computer's "OS" refers to its "operating system." An operating system (OS) is software that runs the rest of a computer and acts as a mediator between the hardware and the user or programmer.

The operating system is a software layer that is essentially a collection of programs that is used to keep track of and correctly use all computer components such as memory, printers, discs, keyboards, displays, and network interfaces, among others.

The job of the operating system is also to manage all of these devices (computer devices) and to provide user programs with a simpler interface to the hardware.

The position of an operating system above the hardware is depicted in the figure below. 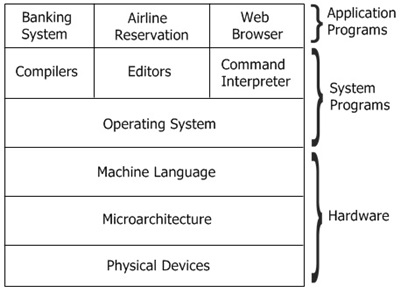 As shown in the diagram above, hardware is at the bottom, which can be made up of two or more layers/levels. Physical devices such as wires, power supplies, integrated circuit chips (IC chips), or cathode ray tubes (CRT) are found at the lowest level. The level or layer following this is micro-architecture. Physical devices are grouped together to form functional units at this level. In general, the micro-architecture level includes some registers that are internal to the CPU or Central Processing Unit, as well as a data path that includes an ALU or Arithmetical Logic Unit.

The Machine language is the next level, which typically has between 50 and 300 instructions. The Input/Output devices are controlled at this level by loading values into special device registers. A disc, for example, can be instructed to read by entering the values disc address, main memory address, byte count, and direction into its register.

Application programs are typically purchased or written by a user or programmer to solve specific problems.

Here is a list of some of the most popular Windows-based personal computer operating systems:

And here is a list of some popular Linux-based operating systems that are mostly used by advanced computer users:

The following are the various types of operating systems:

Multiprocessing is the most well-known and widely used type of operating system. Let me explain it briefly.

A "process" in the computer world is essentially a step, task, or program that runs on a computer. Multi-processing operating systems, on the other hand, are those that are designed or developed to handle multiple tasks at once.

Similarly, multi-tasking operating systems are those that can perform multiple tasks at the same time. A task can be referred to as a piece of work.

You can open your task manager by clicking on the Alt+Ctrl+Del button and then clicking on "Task Manager" to open the task manager window, from where you can see all the tasks that are currently running on your computer systems. For your understanding, here is the snapshot: 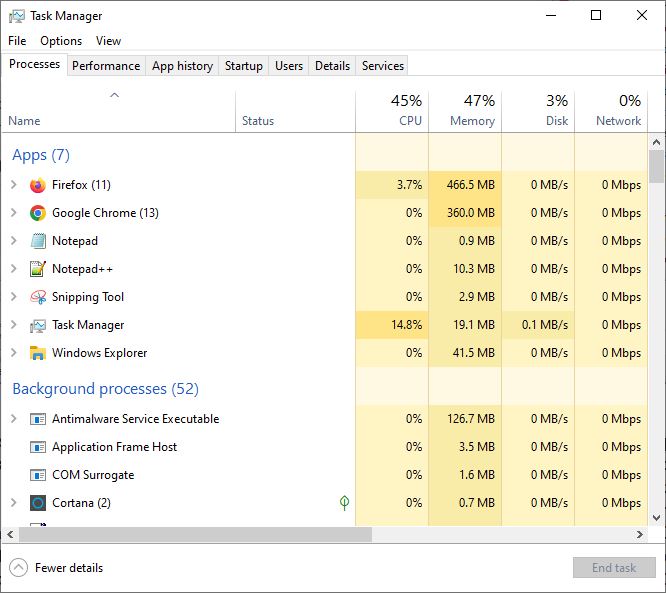 My computer is running Windows 10, a multi-tasking operating system, so I have several applications open at once and many more processes active in the background.

To halt an activity, just click its name and then the "End Task" button at the window's right bottom.

The majority of web hosts employ distributed operating systems, which allow them to pool a single OS instance among several customers. It saves money because only one operating system is required for multiple computers. Among the many popularly distributed OSs, Solaris and AIX are undoubtedly the most well-known and well-respected.