Python Program to Print Even Numbers in a List

This article is created to cover some programs in Python that find and prints all even numbers in a list given by user at run-time. Here are the list of programs covered in this article:

The question is, write a Python program to print all even numbers (if available) in a given list. The program given below is answer to this question:

Here is the initial output of this program's sample run: Print all Even Numbers in a List of n Numbers

This is the modified version of previous program. This program allows user to define the size of list. Let's have a look at the program and its sample run given below: 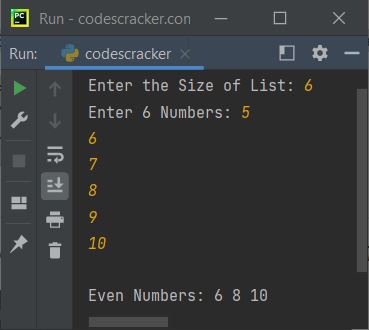