This article is created to cover some programs in Python, to convert lowercase character or string to uppercase with and without using user-defined and predefined function. Here are the list of programs:

The question is, write a Python program to convert lowercase character entered by user to uppercase. Here is its answer. This program uses ASCII value of character to convert the character in uppercase.

Now supply the input say c as character in lowercase, then press ENTER key to convert and print its uppercase as shown in the snapshot given below: 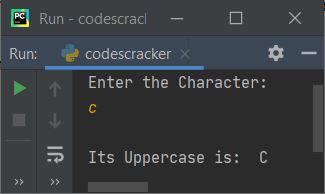 Note - The ord() method is used to find Unicode value of a character passed as its argument.

Note - The chr() method is used to find the character corresponding to the Unicode value passed as its argument.

In above program, the following statement:

states that the value of chup gets subtracted with 32. This statement is used to initialize the ASCII value of corresponding uppercase character. For example, if entered value in lowercase is c and it gets stored in ch variable. Therefore using following statement (from above program):

the ASCII value of c, that is 99 gets initialized to chup. And using the following statement:

chup-32 or 99-32 or 67 gets initialized to chup. And finally, using the statement given below:

the character corresponding to the ASCII value of 67, that is C gets initialized to chup. In this way, the character gets converted into uppercase.

This program is the modified version of previous program, created to handle invalid input. This program uses end= to skip printing of an automatic newline using print()

Here is its sample run with user input C:

Here is another sample run with user input codescracker:

Lowercase to Uppercase String without Function

Here is its sample run with string input codescracker:

For example, if text = "CODEscracker", i=4, and ch="S" therefore the following statement:

evaluates to be, after putting the values:

states that, "CODEScracker" gets initialized to text as its new value. While slicing the string using indexing, that is [:], the index number before colon is included, whereas the index number after colon is excluded.

This program uses upper(), a predefined method to do the same job as of previous program.

This is the last program of this article, created using a class, an object-oriented feature of Python.

In above program, an object named ob is created of class CodesCracker to access its member function, LowerToUpper() using dot (.) operator.