This article deals with program in Python that replaces any particular character from a string with new character. Here string, and both old and new character must be entered by user at run-time. For example, if user enters programming as string, g as character to search, and x as character to replace. Therefore the new string becomes proxramminx.

The question is, write a Python program that replaces any specific character from a given string. The program given below is answer to this question:

Here is its sample run. This is the initial output produced by above Python program:

Now supply the inputs, say codescracker as string, c as character to search for, and x as character to replace with. Here is its sample output after providing exactly same inputs: 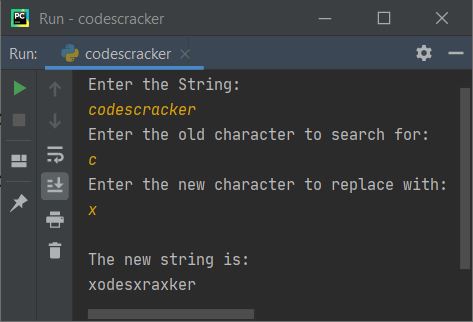 This program is created in a way that, if the entered old character is not available in the given string. Then program further doesn't ask to enter the new character to replace with, rather it produces a message saying the character does not found in given string and skip the rest execution of the program. Whereas if the character gets found, then the program executes in similar way as of previous program: 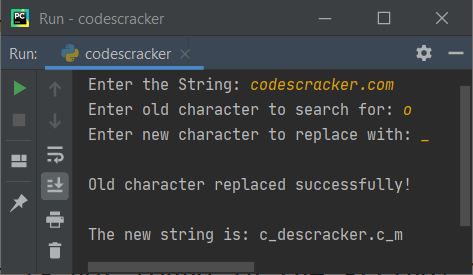 Here is another sample run with user input, python as string and x as character to search. Since x is not available in the given string, therefore program displays the message and skip further receiving user input: