Python Program to Display Powers of 2

This article is created to cover some programs in Python, that find and prints powers of 2 upto any particular term defined by user at run-time. Here are the list approaches used:

Now supply the input say 8 and press ENTER key to find and print all powers of 2 upto 8 terms starting from 0 like shown in the snapshot given below: 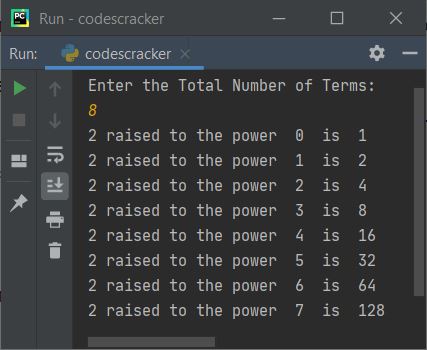 If user enters input as 8, then 8 gets stored in tot. So from above program, the following code (after replacing the value of tot variable):

is created to execute the following statement (present inside its body):

This program does the same job as of previous program, but using a function named MyFun(). This function receives a value as its argument and returns 2 raised to the power of this value.

Here is its sample run with user input 11 as total number of terms: 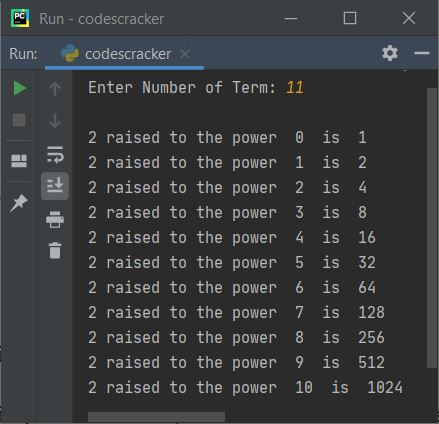 The end= in above program, is used to skip inserting an automatic newline.

This is the last program of this article, created using an anonymous function. Let's have a look at the program first:

This program produces same output as of previous program. In above program, the following statement:

Above program can also be approached directly in this way:

The list() is used to create a list. And the map() returns an iterator of results, after applying the function to each item of a given iterable (list in above program's case).