This article is created to cover some programs in Python, that removes vowels from a string entered by user. Here are the list of approaches used:

Now supply the input say codescracker.com and press ENTER key to remove all vowels from this string and print new string without vowel as shown in the snapshot given below: 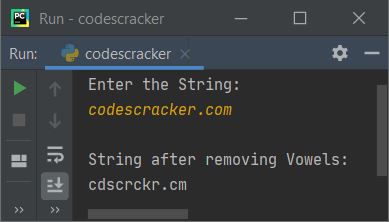 The above program works in a way that:

Note - The len() method returns length of string passed as its argument.

Note - The range() method returns a sequence of values. By default, starts with 0 and increments by 1 each time. Continues until the value provided as its argument.

The dry run of above program with user input codescracker.com goes like:

This is the modified version of previous program. This program uses for loop in a way that, each and every characters of string gets copied to c one by one, and using c's value, I've checked and does the job of removing vowels just like previous program. The only difference is c is treated as text[i] here.

Here is its sample run with string input Welcome to codescracker.com:

Here is its sample run with same string input as previous sample run:

In above program, the following statement:

states that, except character at ith index, all characters before and after ith index, gets added and initialized to text as its new value.

Note - While slicing string using index pairs inside square brackets, that is [:], index number before colon is included, and index number after colon is excluded.

This program uses replace() method to replace the vowel with nothing (""). So that, one by one all vowels gets removed with "", that is empty. Let's have a look at the program