You can use a CSS style sheet with an HTML document by learning how to link the CSS code with the HTML document.

A CSS style sheet can be linked to an HTML document in a variety of ways, where each way has its own advantages and disadvantages.

There are the following three ways to apply CSS style to your HTML document.

The internal style sheet is written the HEAD element of the HTML document. This style is applied only to the documents in which it is defined and not referenced by any other Web document.

The syntax of internal style sheet is written as follows.

Here is an example shows how to use embedded CSS for applying styles to HTML elements.

Here is the sample output produced by the above embedded CSS example code: 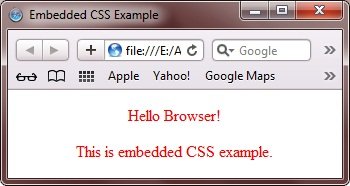 Advantages and Disadvantages of Embedded CSS

The following are the advantages of using the internal style sheets.

In an external style sheet, the style sheet rules are saved into a text file with the .css extension. Once you have a style sheet document, you can link it with your Web pages in the following two ways.

(i) Linking - Refers to the HTML LINK element, which is used to link a style sheet. This element has the following three attributes.

The following code fragment shows an example of using the @import rule.

In the above code fragment, we have used the @import keyword followed by the URL of the style sheet, named mystylesheet.css.

In addition to the @import rule, the @media rule of CSS helps you in applying the styles to the media device depending on the type of the device a page is displaying. Some of the media devices supported by the CSS are computer screens, printers, televisions, handhelds, speech synthesizers, and projectors.

Please note that all the media types are not supported by all the Web browsers, for example, the Internet Explorer 4.5 and Netscape Navigator 4.7 browsers or their later versions, support the computer screen, printer, and projector media types.

In the preceding code fragment, we have defined the @media rule for the screen media type.

An external style sheet is a separate text file with .css extension. You define all the Style rules within this text file and then you can include this file in any HTML document using <link> element.

Open your text editor and type the following code into it.

Save the file as filename.css and close it.

Now this time type the below html code into your text editor like notepad for windows user.

Open your file named filename.css into your web browser like google chrome, and copy the url (full path) of this file.

In the place of full path of css file, place the full path (copied from browser) of your css file (filename.css).

Now open the above html file, it will display the following output in the browser: 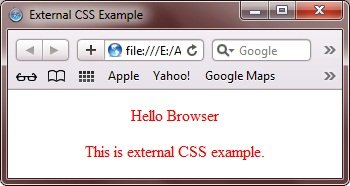 Advantages and Disadvantages of External CSS

The following are the advantages of using the external style sheets.

The inline style properties are written in a single line separated by semicolons. These properties are placed inside the style attribute of the HTML element, on which you want to apply the style.

In the above code fragment, the p element is styled.

Let's look at the following example that shows how to use Inline CSS to style HTML elements:

Below is the sample output produced by the above inline CSS example code: 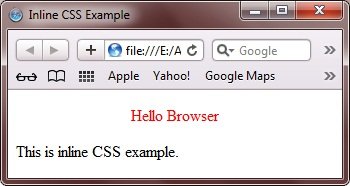 Advantages and Disadvantages of Inline CSS

The following are the advantages of applying inline style in an HTML document.

Inline styles have the following disadvantages.