The count() function in Python returns the number of occurrence of a particular element or specified sub-string in a list or a string. For example:

The output produced by above Python program, demonstrating the count() function, is:

because the element 54 appears for one time in the list named a, whereas the sub-string "dot" also appears for 1 time in the string named mystring. Therefore the output was 1 and 1 for both the use of count().

The syntax to use the count() function in Python is:

As already told that the count() function returns the total number of times, a value (an element of a list or a sub-string of a string) available in a list or a string. Therefore, if the value passed as an argument of count() is not available in the list or string, then the function returns 0. Meaning that, the given value appears 0 times in the list or string.

Here is an example to count the occurrence of a value available in a list, entered by user:

The snapshot given below shows the sample run of above Python program, with user input 4 as number of items to store in the list. l, i, s, t as four elements, and s as element to find and print its occurrence: 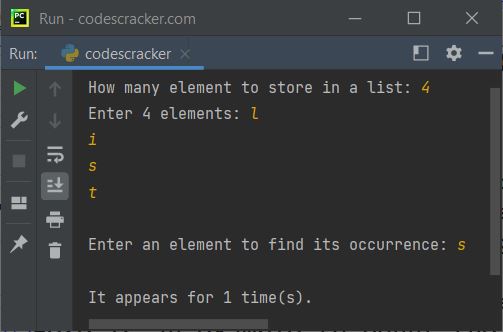 Here is another example of count() function, to count the occurrence of a sub-string in a string, entered by user at run-time of the program:

Here is its sample run with user input codescracker.com as string and co as sub-string to find and print its occurrence:

That is, "codescracker.com" are the two "co" available in the string.

The main use of count() function in Python, is to either search for an element or to search and find the number of occurrence of an element in a list. Here is an example: 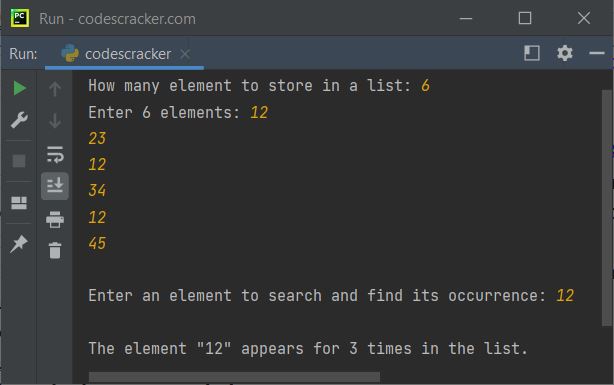 The same things happens in case of a string. That is, the function named count() returns the occurrence of a particular word or a sub-string in a string.