The compile() function in Python returns a code object of the specified source. This function is used when we need to compile a string as a code. For example:

Note - Most of the time, professional Python developer uses compile() with exec() function in metaprogramming. An example of metaprogramming is given at last of this article.

The syntax of compile() function in Python is:

Note - The default value of flags is 0, dont_inherit is False, and optimize is -1

Because the syntax of compile() function is covered. Therefore it is the time to get some examples of this function to understand implementation.

Use compile() Function to Compile a String as Code

Here is an example that compiles a string as a code, using of course, the compile() function in Python:

The snapshot given below shows the sample run of this Python program, with user input Python Programming:

The above program can also be created in this way:

Since the first statement becomes too long, therefore I've split the statement in way that each line is used to add one statement inside the str, a String type variable.

I've used exec as mode, because str contains block of statements. But if you will not, that is, if you write any of the other two say eval as mode, then the compile() function raises an exception named SyntaxError, like shown in the snapshot given below:

This is because, after using the eval as mode, meaning that the compile() function treats the source object containing a single expression. But it contains a block of statements. Therefore we're seeing this error. This error can be removed either by using the correct mode, or by catching the exception using the except block. The second way is actually not removing the error, rather it produces your manual error message. Here is the modified version of previous program:

Now the output would be:

Indentation is Important while Putting the Code in Source Parameter

Here is another program that again uses a string variable str that contains a block of statements with some conditional statements. Then the variable is used as source for compile() function to execute the code available in the string.

This program basically checks whether a number entered by user is an even or an odd number. The sample run with user input 13 is shown in the snapshot given below: 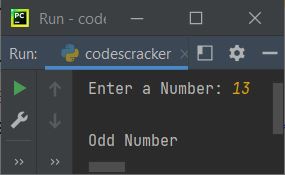 The interesting question that may arise in your mind is, what is the type of variable cob ?
Here is another program I've created to check it out. I know it is a code type object. But let's create an example to print the type using the program:

The output produced by this program, is:

The compile() function in Python is also used to do metaprogramming. In metaprogramming, we use a program as the data of another program. For example, the program given below uses the content of a file named codescracker.txt as code data for the program:

The sample run of this program, with user input 10 and 50 is shown in the snapshot given below: 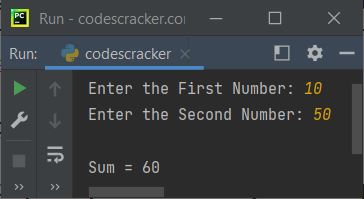 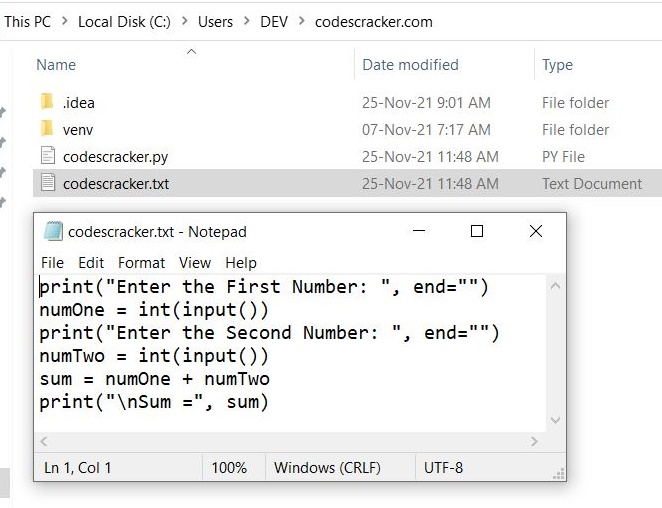 This is just a simple program demonstrating how the compile() function can be used to execute code from an external file.

Note - The detailed description about open(), read(), and close() methods are given in its separate tutorials.