The syntax to use readlines() function in Python is:

where fo is the file handler or object. The size_hint parameter is optional. This parameter is used to limit the number of lines to be return.

Note - If the total number of bytes returned, exceed the size_hint parameter's value, then no more lines will be returned.

Now let's create a program that uses readlines() to read all lines from this file:

The output produced by this Python program, is shown in the snapshot given below:

To read the content of file, line by line, then we need to fetch and print the element, one by one, like shown in the program given below:

Now the output produced by this Python program looks like: 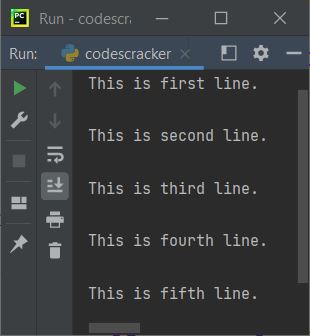 See the double newlines between every element or line. It is because, one newline using the default behavior of print() and the another because of last character of every element or line, that is \n, indirectly a newline. Therefore, we need to modify the following statement, from above program:

Now let's modify the above program with a program that receives the name of file from user at run-time of the program. Also this program handles errors when user enters a file that does not exist:

Here is its sample run with same file name as of previous program, that is myfile.txt: 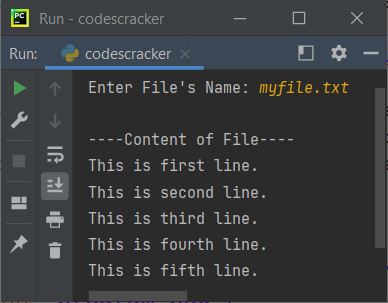 Note - The end= parameter is used to change the default behavior of print(). To learn in detail, refer to its separate tutorial.

Now let's create another program that uses the optional parameter of readlines() to read the limited number of lines:

The output produced by above program will be:

Here is another program:

This time, the output produced by above program will be:

See, when the number of bytes crosses the total bytes/characters available in the current line, the next line too gets printed along with current line.