Don't skip this tutorial, until getting complete understanding on range(), as it plays like a trump card in most of the program created using loops

What is range() Function ?

As name suggests, range() creates/generates a sequence of numbers. That is, using range(), we can generate some set of numbers. The order of sequence is defined through its argument(s) passed.

Most of the time, range() used in for loop. Since for loop is used to execute some set of statements, some required number of times. And range() helps to do that type of task.

The syntax of using range() function is:

The first (start) and third (increment_by) arguments are optional. Let's understand about all the three arguments in detail.

In all the three arguments, the second one, that is stop is necessary. That is:

If you're not getting an idea, on what I'm trying to say, then just read it and continue. Because after looking at some of the examples given below, I'm sure, you'll get to know everything about the topic.

Note - All of the three arguments must be an integer. That is, don't pass any argument as real numbers like 1.4, 5.2 etc.

Since programming is the thing, that can not be learn by theory only, as it must requires practical implementation of the code given in theory part. Therefore, I've provided almost all the programs that uses total variety of range() function. Let's start with very basic one:

The output produced by above program is:

In above program, the statement:

generates a sequence of numbers, that are from 0 to 10, where 0 is included but 10 is not. Since I've not provided rest of the two arguments. Therefore, the start gets automatically initialized with 0, whereas increment_by initialized with 1. That is, the generation of sequence of numbers, gets started with 0, and increment by 1 each time. This process continues until 1 less than the number (stop's value).

Now let's change the above program with the program given below:

With this program, you'll get following output:

That shows, if you iterate nums, then you will get a sequence of numbers starting with 0, and ends with 9 (included), like shown in the previous program's sample output. You can also directly use range() function (in for loop) like shown in the program given below:

You'll get the same output, that is, a sequence of numbers from 0 to 9. You can also create list using range() function, like shown in the program given below:

Now the output produced by above program is:

The same program can also be replaced with:

The output will be same as of previous program.

Since all the above example programs of range() function is based on only argument. Therefore let's start with providing more than one arguments like shown in the very basic example given below: 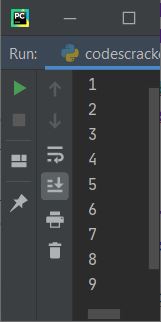 As you can see from above sample output, the program produces a sequence of number, that is from 1 to 10, not 0 to 9. Because I've provided 1 as the number to start the sequence with.

range() Function with all Three Arguments

Now let's use all the three arguments:

The above program produces the following output:

As you can see, the third argument is 5, therefore each time the sequence gets incremented by 5.

The range() function can also be used to generate/create sequence of numbers in reverse. To do this task, these are the two basic things, that must be followed while doing this task:

The range(10, 0, -1) indicates that the sequence gets started with 10, decremented by 1 (because I've used -1), and continues generating the sequence of numbers before 0. Here is the output produced by above program:

Here is another program:

Note - Always use minus (-) for the third argument. That is increment_by must gets replaced with a value along with minus (-).

Generate Sequence of Numbers using range() Based on User's Requirement

This is the master program for you, that helps you to understand about range() function completely. Let's have a look at the example program and its sample run given below: 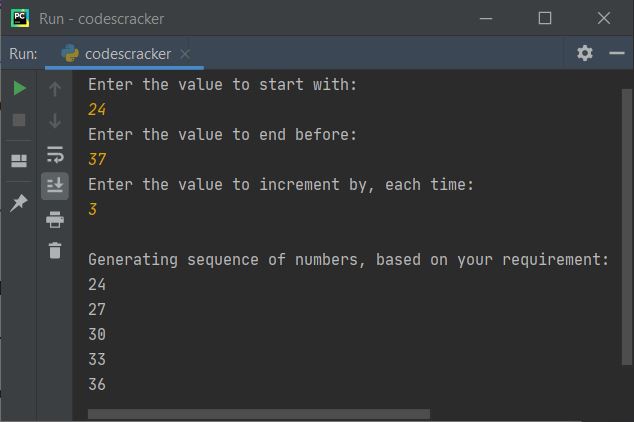 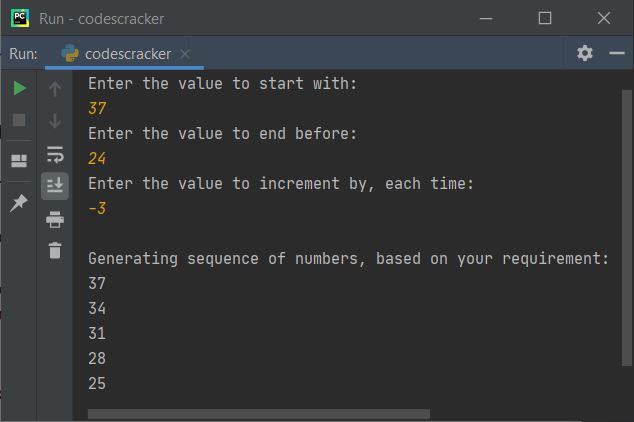 Now I think, you've got the complete understanding about range() function in Python. That is very good, as it is going to use a lot of times while you program in Python.