The bytes is the core inbuilt type like bytearray, used in manipulating the binary data. Unlike bytearray, bytes objects are immutable sequences of single bytes, which are basically the arrays of octets, used for storing the data, but not the text.

Note - Bytes objects are similar to string objects. The difference is, values of bytes literals comes with a b prefix. For example: b'codes', b'codescracker dot com' etc.

Important - Only ASCII characters are allowed in bytes literals.

A bytes literals can be created in one of the following ways:

The b prefix is required in all the cases.

The snapshot given below shows the sample run of above Python program, demonstrating the creation of bytes in Python: 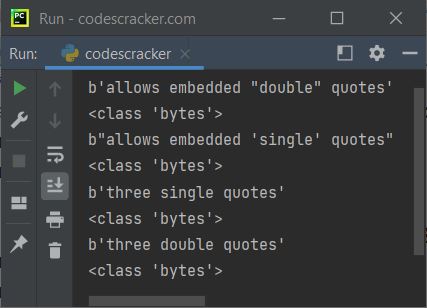 ASCII Code Representing the Character of a bytes Object in Python

This program is created to receive a string input from user at run-time of the program to print the ASCII code corresponding to all the characters available in the given string:

The snapshot given below shows the sample run with user input CodesCracker as string to list and print ASCII values of all characters:

Just like list, bytes object can also be sliced to get some part of the bytes object value. Here is an example of bytes slicing.

Note - For detail about slicing, refer to the separate tutorial of list. There you'll get all the detail.

To convert bytes object to a string object, refer to Python bytes to String program article.