Decimal to Hexadecimal Conversion with Examples

This post, which was created and published, explains the method that is utilized when converting a number from the decimal number system to the hexadecimal number system. The explanation is accompanied by an example. But before we get started, let's first go ahead and define these two different number systems.

Follow the steps below to convert a number in the decimal number system to its hexadecimal equivalent:

In order to make things easier for you, I have compiled a table below that lists all of the hexadecimal equivalents of decimal digits:

To help you understand the conversion in the most effective way possible, I believe that it is the appropriate time for you to look at an example at this point. So, what exactly are we holding out for?
Take this example as a way to illustrate how much simpler things can be for you.

We have a number written in decimal notation, which is 259. Now we must figure out what that number's representation is in hexadecimal. Take a look at the following conversion figure, which explains everything by using the figure itself as an example.

Allow me to provide another example. I'm going to convert the decimal number 843 to its hexadecimal equivalent for this. 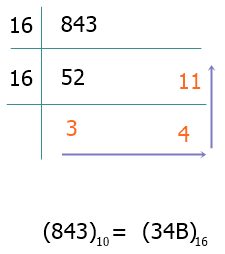 To represent 11 in hexadecimal, we need to use B; therefore, I have written B in place of the remainder 11.