In this article, we will learn how to convert a number from the decimal system to the binary system, and we will also look at an example. But before we get started, let's make sure we're clear on what these two numbers represent.

Decimal to Binary Conversion with an Example

Now that we have a number in the decimal number system, let's say 105, our task is to find that number or one that is equivalent to it in binary form or in the binary number system. Let's focus on the information presented in the following figure: 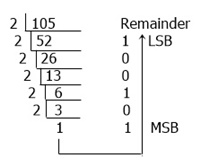 Here are the steps or rules of multiplication for fractional part conversion:

Let’s take an example to apply the above steps practically and learn how we can convert any fractional part value given in the decimal number system to the binary version of the same fractional part.

The table given below shows the step-by-step multiplication of the fractional part as directed in the above rules.

As you can see, the multiplication procedure