This article was written and is being distributed in order to provide a description of the four distinct sorts of codes, which are

Now that we have everything out of the way, let's go through each of these four codes one at a time, beginning with the "BCD code."

The BCD code is the most straightforward method for employing binary numbers to represent decimal numbers.

In BCD code, a decimal number is represented by a binary value that has four bits.

If a decimal number has two or more digits, then each of those digits is individually represented by its corresponding binary representation that has four bits. As an illustration, the number (278)10 written in BCD appears as seen in the following picture: 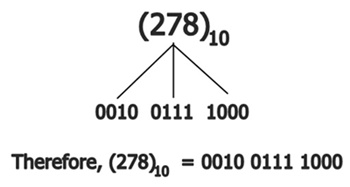 BCD is a weighted code, which means that the weights of the binary bits that represent individual digits are 8, 4, and 1, respectively. Subtraction on modern computers is performed using complements, and it is difficult to construct complements when integers are represented using BCD codes.

However, we can also use a 4-bit binary value, which is called "BCD 8421 encoding." I included the following table for your understanding.

In the excess-3 code, 3 is added to each individual digit of a decimal number, and then the binary equivalent is written. For example, the code (278)10 in excess-3 is represented by 0101101011. This code is not weighted.

Because 3 is added, the decimal digit "-3" equals "0000" in "Excess-3". For your understanding, I included the following table, which consists of decimal digits and their corresponding excess-3 codes.

If we take the example of converting 9 to "excess-3" code, Then, since 9 is equivalent to 1001, adding 3 gives 1100. Therefore, the decimal digit 9 is equivalent to 1100 in "excess-3." If you are still having trouble understanding it, let's take a look at the following process:

The following table, which I have included in this section, is provided for your understanding.

I don't believe this table requires any further explanation after describing the "BCD-8421 code" using the table included in the "BCD code" section above. This table works similarly to that one.

The gray code is a binary code. The binary bits are arranged in such a way that only one binary bit changes at a time when we change from any number to the next.

Gray code is reflected code. This code is used in shaft encodes, which indicate the angular position of a shaft in digital form. Shaft position encoder discs are used as sensors. It is not a weighted code. Gray code can be constructed using the following properties:

The following table provides an illustration of how each of the four distinct types of code can be transformed into the others.