Block Diagram of Computer with Description

Here is the block diagram of a computer system: 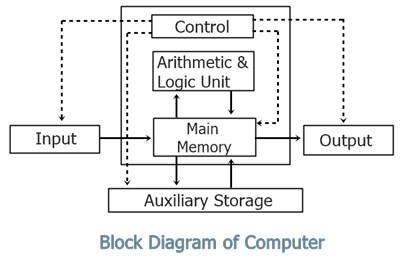 The "Central processing unit (CPU)" refers to the box depicted in the aforementioned "block diagram" of a computer that contains the control units, the arithmetic and logic unit, and the main memory. I've provided a brief definition of "CPU" here; for more information, please see the dedicated article.

Let's go through each component of the diagram that was just presented by breaking it down piece by piece.

The CPU can be called the brain of a computer system.

The central processing unit (CPU) is where the majority of the important calculations and comparisons are performed. In addition, the CPU is in charge of turning on and controlling the operation of the other units.

The arithmetic logic unit, also known as the ALU, and the control unit (CU) are the two primary elements that make up this unit. First, let's take a moment to briefly define these two different units of CPU.

The arithmetic logic unit is responsible for carrying out all of the mathematical operations, including addition, subtraction, multiplication, and division. In addition to that, a logical operation is used for the comparison.

In addition, the control unit of a central processing unit is responsible for directing the overall operation of a computer. In addition to this, it exercises control over all devices connected to the CPU, including memory and input/output devices.

The input/output unit is made up of different devices that are responsible for transmitting and receiving information between the memory of the computer and the outside world.

Memory units are an integral part of any modern digital computer. It is the repository for all of the results, both intermediate and final.

The data that needs to be processed and the instructions that need to be carried out are both stored in this memory unit so they can be accessed quickly.

Primary memory is connected to the input unit as well as the output unit in a straightforward manner. It stores both the data that was input and the result of the calculation.

It is not possible to store data permanently on the primary storage for use at a later time. Because of this, additional forms of data storage technology, also known as secondary or auxiliary storage, are required in order to store the data in a manner that is both permanent and accessible over an extended period of time.