Algorithm and Flowchart with Examples

We will study about algorithms and flowcharts with examples in this post or lesson. Let us begin with the algorithm.

An algorithm is a step-by-step description of how to solve any given problem.

Alternately, one could say that the algorithm of every given program is a step-by-step solution description of the problem or program that has been presented.

In order to be considered an algorithm, a sequence of instructions must have the following characteristics:

Example of an Algorithm

In this case, we must develop an algorithm or a step-by-step solution description for calculating the sum of the first N numbers. So, what are we still waiting for? Let us now create an algorithm to address this problem.

As you can see from the preceding algorithm, which is presented in eight steps, it assists you in creating a program to find the sum of the first N numbers.

In this case, we must create an algorithm that will assist us in determining the smallest and largest number from a given list of integers.

You can now easily apply all of the above stages to create a program that finds the largest and smallest number from a given list of integers.

A flow chart is the pictorial representation of any given task, problem, or program.

There are two types of flow charts, given here with their short descriptions:

Here are a few of the most important reasons why you should use flow charts before applying any solution to a program:

Here is a list of some primary or main disadvantages of using flowcharts for any given problem:

Standardization of these fundamental flow chart symbols has been completed by the American National Standard Institute (ANSI).

In order to denote the beginning and the conclusion of the program, the terminal symbol is utilized. The following is the sign for the terminal:

The input and output of an operation are typically represented as two sides of a parallelogram. The following is a demonstration of an input/output symbol that may be used in a flowchart:

The rectangle symbol is required to be used whenever there is a need to denote a processing operation in a flowchart. The following is a demonstration of the symbol for the rectangle that is used in creating flowcharts to represent activities involving storage or arithmetic:

A program's logic flow can be analyzed by tracing the path taken by the lines of code. It is necessary to draw lines in the spaces between each box on the flowchart to show the direction in which the program will proceed. The example of the line flow symbol is as follows:

When connecting the various components of a flowchart, we need to draw a circle. The demo symbol for a circle that is used in a flowchart looks like this:

Example of a Flowchart

Let's look at a flowchart example to understand how to use all of the symbols described above to build a visual representation that describes the solution to any program or problem.

Create a flowchart to determine the greatest of three numbers

The flowchart shown in the figure below assists in determining the greatest of the three numbers: 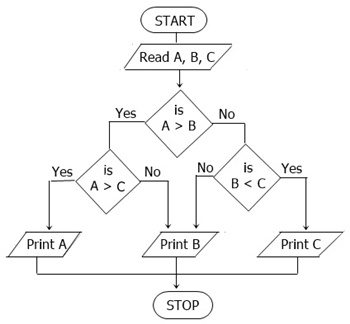 Another flowchart for calculating the sum of the first N natural numbers is shown below: 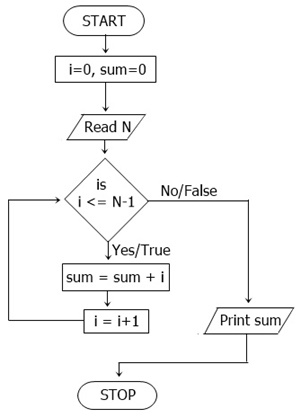