This post will teach you about one-dimensional arrays in C++. So, without further ado, let's get started.

A group of elements that all share the same data type and name is what makes up a one-dimensional array. The common name of each element as well as its own distinct index are used to identify each individual element.

Declare a One-Dimensional Array in C++

where "type" is the data type, "name" is the name of the one-dimensional array, and "size" is the number of elements that the array can hold. As an example:

declares an array "arr" that can store up to 5 elements of type "int."

Initialize a One-Dimensional Array in C++

Here is the general form to initialize values in a one-dimensional array in C++.

Here is an example of declaring and initializing values for the array name arr of type int, which contains 10 elements.

If you are interested in viewing the programs that were created on a 1-D array, it is recommended that you read the article titled "one-dimensional array programs." On the other hand, after I finish explaining this point, I'll give you some examples to help you better grasp the concept and for your own convenience.

The output of this C++ program is as follows:

That is, the first element (1) is stored at "arr[0]," similarly, the second element (2) is stored at "arr[1]," and so on. Therefore, using just the "for" loop with its variable running from 0 to 4, I printed the elements of each array on the output console.

Now let me modify the above program to print the value of each element along with its indexes.

Now the output should be:

Now is the time to again modify the above program to allow the user to enter the elements for the array: 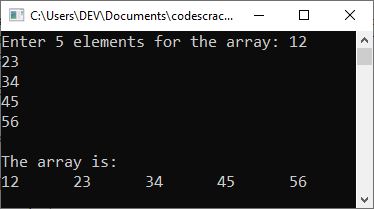 Let me make one more change to the program. The following program allows the user to specify the array's size as well as its elements, and then prints the elements to the output console. 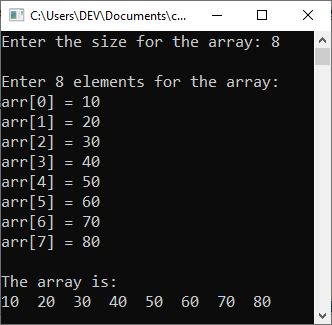