Steps to Process a File in C++

Here are the steps listed that need to be followed in order to process a file in a C++ program. The five steps to using files in your C++ program are:

Let's discuss these steps in detail now. I'll explain it with an example to help you understand.For instance, if you have to write a program for the following.

Get the roll number and marks of the students in a class (get these details from the user) and store these details into a file called marks.dat.

Let's now discuss the above-mentioned five steps with the help of the above example. But before this, may I tell you an interesting thing? You've been working with file streams right from day one of C++ programming. This is because I/O devices are implemented as files in C++. These cin and cout are the input and output streams, respectively. The input stream (cin) is linked to the keyboard, and the output stream (cout) is linked to the monitor.

Step No. 1: Determine the type of link required

In the preceding example-problem, it is stated that data is to be read from the user, i.e., through the keyboard (file), and that the data should be brought into memory (for which cin is already declared), and then these read details are to be stored in a file, i.e., data should be sent in the file called marks.dat from memory.

For reading purposes, a file-to-memory link is required for the keyboard, but for this coin, which is already declared, and to store this data in a file, the memory-to-file link is required. Since for marks.dat, no predefined link is available, we'll have to create this type of link.

Thus, we have determined the type of link required for file marks.dat, which is a memory-to-file type link.

Step No. 2: Declare a stream for the desired type of link

After determining the type of link required, the next step is to create a stream for it. In order to create file streams, the header file fstream is included in the program.

For different types of links, different stream classes are used for stream declarations. For the file-to-memory (i.e., input) type of link, the ifstream class type's stream is declared. For example,

The following table summarizes these stream types as follows:

For the above-mentioned example, we have already determined the link type to be memory-to-file for file marks.dat. In order to declare a stream for it, we may write as follows:

Step No. 3: Attach the desired file to the stream

After declaring streams, the next step is to link the file with the declared stream. This is done by opening the desired file.

For example, if a file named sample.dat is to be opened in input mode, i.e., linked to a stream of type ifstream, we can do it in the following two ways:


Notice that in the above examples, a file mode (ios::in here) is used. ios::in is the default file mode for the ifstream type of stream.

Similarly, in order to open a file, say oput.txt, in output mode, i.e., to link it with a stream of type ofstream, we may write:

To open a file, say newfile.txt, in I/O mode (stream of fstream), we may write as

Notice that multiple file modes are separated by a bitwise or "|" pipe sign.

Now, with all the information and knowledge gained so far, let us apply this to our example problem given above.

We may either combine steps 2 and 3 as follows:

Or we may write them separately as

Step No. 4: Now proceed as needed

Under this step, whatever processing is required for the given problem is performed. For instance, our given example-problem requires us to read the marks and roll numbers of students in a class and store them in a file called marks.dat.

For this, we have already declared the stream and linked our file marks.dat with it. Now it's time for processing. The code fragment for processing is given below:

Step No. 5: Close the file link with stream

The final step is to unlink the file from the stream. This is performed through the close() function. For example, if the file stream is fin, then we need to write it as:

Similarly, if the stream name is fio, we'll write it as:

Notice that to delink a file, there is no need to mention the file name; only the stream name (to which the file is linked) is required.

To de-link our file marks.dat from the stream fout, we need to write:

If we put together all the pieces of code used for our example problem, the program will look like the one given below:

Get the roll numbers and grades of students in a class (from the user) and save them in a file called marks.dat: 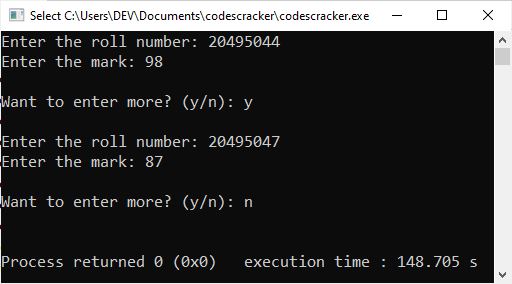 Now if you open the current directory, the directory where the above C++ source code is saved, then you will see a file "marks.dat" will be available there with the following content:

I included the following snapshot for your understanding. 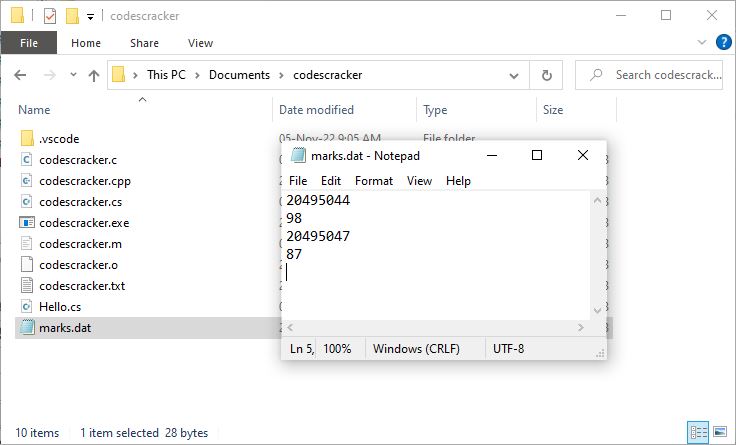