Declaration and Use of Structure Pointers in C++

It takes the following general form :

The declaration of structure type and the structure pointer can be combined in one statement. For example,

Using structure pointers, the members of structures are accessed using arrow operator ->. To refer to the structure members using -> operator, it is written as

That is, to access dd and yy with dt_ptr, we shall write

Consider the following program, which shows how to use these pointers. This C++ program demonstrates how to declare and use Structure Pointers in C++.

When the preceding C++ program is compiled and executed, the following output is produced:

There are the following two primary uses for structure pointers:

Here is another example program that you can look at to get a better understanding of structure pointers in C++. 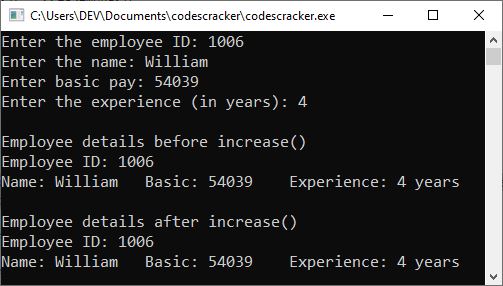 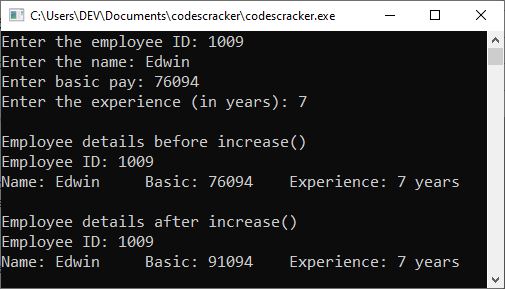 Because employees with more than 5 years of experience will receive an additional salary of "15000" in addition to the basic pay, the salary was increased in the second run.

A structure that has a member element that refers to the structure itself is known as a self-referential structure.

To understand the self-referential structures, we shall first talk about a situation. Assume you are required to write a program that stores and manipulates employee information such as empid, name, basic, experience, and so on. Going through this problem, it immediately suggests the use of structures to hold the information. However, how will these structures be stored and manipulated? For this problem, you may use a fixed-size array of structures. But a fixed-size array has some serious drawbacks. An important one of them is that the size of the array arbitrarily limits the length of the list of employees. What if you realize during program execution that the array should have been bigger? To avoid such a problem, you would certainly go for a dynamic list so that the list can be as large as free memory allows.

A dynamic linear list in C++ is called a linked list. One major use of linked lists is to create arrays of unknown size in memory.

A linked list requires that each item of information contain a link to the next element in the list. Each data item usually consists of a structure that includes information fields and a link pointer.

A linked list is a structure that has an additional pointer as an element that points to another structure of the same type.

That is, to declare the above-shown structure type, we shall write

The new operator can be used to create dynamic structures, which are structures for which memory is allocated dynamically. To do so, we use the following syntax:

where struct-type is the predefined structure type for which the memory is being allocated, and struct-pointer is a pointer of the struct-type type that stores the address of newly allocated memory. For example, we could give to dynamically allocate memory for the employee structure defined above.

A dynamic structure can be released using the deallocation operator delete, as shown below:

where struct-pointer is the same pointer that was pointing to the dynamically allocated memory. That is, to release memory, which is being pointed to by eptr, we shall write.