Here is an example program, uses variables to store the value entered by the user, to print the stored value back to the output screen 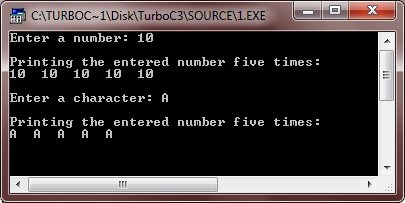 There are the following two values associated with a symbolic variable :

Here is the general form to declare a variable in C++

Here, type is any valid C++ data type and name is the name of the variable. A variable name is an identifier. Therefore, all the rules of identifier naming apply in declaring the name of a variable. Following declaration creates a variable age of int type :

To declare signed or unsigned variable, place these modifiers before the data type. For example :

To declare more than one variable of the same data type, do the following :

Here is a code fragment showing the variable initialization in C++

Here is the sample output of this C++ program:

In both cases, val initialized with a first value of 1001. Following are some more examples of initialized variables :

Note - An l (small L) or L suffix on an integer means the integer is a type long constant, a u or U suffix indicates an unsigned int constant and ul or lu indicates a type unsigned long constant. A variable can be declared anywhere in the C++ program but before its first reference.

One additional feature of C++ is that it permits initialization of the variables at run time. This is referred to as dynamic initialization. A variable can be initialized at run time using expressions at the place of declaration. For example, if a variable has been declared as follows :

You can also write the above two statement in one statement like this:

It will initialize avg using the information available at run time i.e., using the values of sum and count known at run time. Here is an example program demonstrating dynamic initialization in C++

Important - Variables that are not initialized are not empty. If you do not initialize your variable, they will contain junk (or garbage) values left over from the program that last used the memory they occupy now, until the program places a value at that memory location.

Here are some more C++ examples listed, that you can go for: