A structure element (member) may be either complex or simple. The simple elements can be any of C++'s fundamental data types, such as int, float, char, or double. However, a structure may consist of an element that itself is complex, e.g., arrays, structures, etc.

Thus, an element of a structure may have been an array or a structure in itself. A structure consisting of such complex elements is called a complex structure.

A structure can be nested inside another structure. The following code fragment illustrates it:

declares a variable "address" of the type "addr."

Please note: While defining such structures, just make sure that inner structures are defined before outer structures.

The members of structures are accessed using the dot operator. To access the "address" member of the "emp" structure, which is a variable of another structure, "addr", we shall write:

We can write the following to set up the "houseno" member of the "addr" structure, whose variable ("address") is declared when the "emp" structure is declared:

where "e" is the "emp" structure variable. The example given below will clear all your doubts regarding the nested structure in C++.

The idea of nested structures can be seen in action in the following example program, which was written in C++.

The following snapshot shows the initial output produced by the above program. 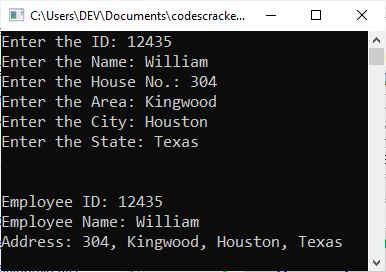 The following statement is from the preceding example: