The functions get() and put() are byte-oriented. That is, get() will read a byte of data, and put() will write a byte of data. The get() method has many forms, but the most commonly used version is shown here, along with put():

The following program brings up on the screen the contents of a selected file. The get() function is being used here.

Let's suppose that the file "codescracker.txt" contains the following information: 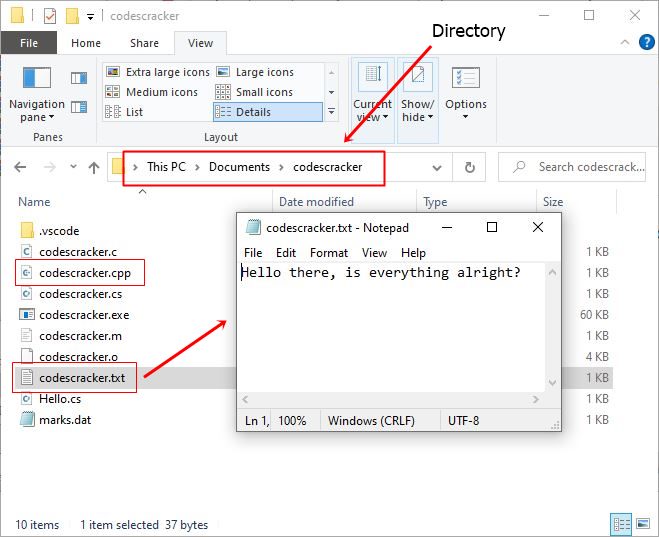 As you can see, the file "codescracker.txt" is saved in the current directory, the directory where the above source code "codescracker.cpp" is saved. Now the following snapshot shows the initial output produced by the above program:

Now enter the filename, say "codescracker.txt," and hit the ENTER key to produce the following output:

As was previously mentioned, the stream that is associated with the file will become zero when the end of the file is reached. As a result, when "fin" reaches the end of the file, it will have a value of zero, which will cause the "while" loop to terminate.

The following piece of code makes use of the put() function in order to save all characters having an ASCII value between 33 and 127 in a text file with the name "aschars.txt."

The following is a sample execution of the aforementioned C++ program: 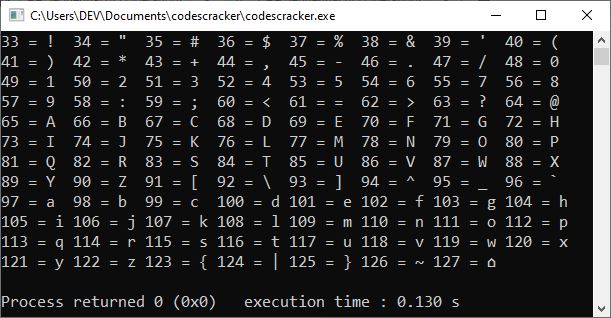 The Other Forms of the get() Function

In addition to the form shown earlier, there are several other forms of the get() function. The two most commonly used forms of the "get()" method are shown in the following two prototypes:

The first form (#1) begins to read characters into a character array that is pointed to by "buf" and continues to do so until either the "num" characters have been read or the "delim" character has been encountered, whichever comes first. As an illustration, consider the following statements:

will continue reading characters into the "line" until either 40 characters have been read or a character with a dollar sign (whichever comes first) has been encountered. In other words, if the following information is provided in response to the statement made in the previous paragraph:

"line" will then be storing

And if the given input is as follows:

The contents of "line" will be

The second form (#2) of get() returns the next character from the stream. It returns EOF if the end of the file is encountered. For example, the following code fragment illustrates it:

getline() is yet another member function that accepts user input, and its prototype is as follows:

As can be seen, this function is almost exactly the same as the version of get() that takes a buffer, a number, and a delimiter. In addition to that, the getline() function will read characters from the input stream and store them in the array that is referenced by the variable buf. This process will continue until either num characters have been read or the delimiter character that was specified is found. If the value of delim is not specified, the default behavior is for it to be a newline character.

The read() and write() functions

Utilizing the read() and write() functions provided by C++ is an additional method for reading and writing blocks of binary data. Their models are as follows:

As you see, these functions take two arguments. The first is the address of variable buf, and the second is the length of that variable in bytes. The address of the variable must be type cast to type char * (i.e., a pointer to a character type).

The data written to a file using write() can only be read accurately using read().

Using the write() and read() functions, the following program writes a structure to disc and then reads it back in:

The following snapshot shows the sample run of the above program with the following user inputs: "William" as name and "430" as balance.

It is clear that only a single invocation of the read() and write() functions is required to read or write the entirety of the structure. There is no requirement that each individual field be read or written in isolation.

The functions read() and write() can also be used for reading and writing class objects. These functions handle the entire structure of an object as a single unit, using the computer's internal representation of data. For example, the function write() copies a class object from memory byte by byte with no conversion. But one thing that must be remembered is that only data members are written to the disc file and not the member functions.

The length of an object is obtained by the sizeof operator, and it represents the sum total of the lengths of all the data members of the object. Here is an example:

The following snapshot shows the sample run of the above program with user inputs: "codescracker.txt" as the name of the file and "William," "A," and "90" as the details for the first student; similarly, I supplied other details for the other two students. 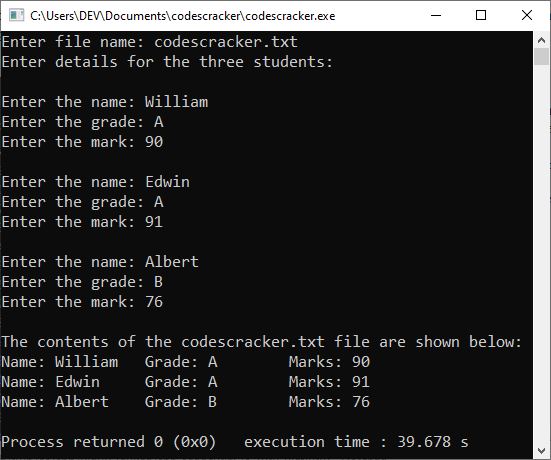 Here are some more C++ example programs listed, that you can go for: