Data Types - Data types are means to identify the type of data and associated operations of handling it. C++ data types are of following two types : 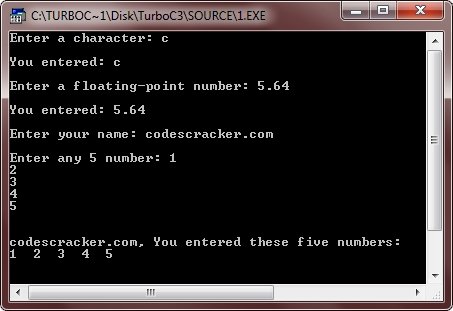 As already discussed that there are following five fundamental data types in C++ :

All other data types in C++ are based upon one of these fundamental types. Such data types are known as derived data types. The size and range of these data types vary with each processor type and with the implementation of the C++ compiler. A character is generally 1 byte and an integer often 2 bytes, but you cannot make this assumption if you want your programs to be portable or adaptable to the widest range of computers. Let's discuss each type of data types in details.

Before discussing all the fundamental data types of C++, let's look at the following table to know the C++ data type sizes, and ranges:

Integers are whole numbers such as 4, 56, -234, 0 etc. They have no fractional parts. Integers are represented in C++ by int data type. An identifier declared as int cannot have fractional part. Integers can be positive or negative but whether or not integers can have negative values, it depends upon the integer types which will be discussed in the separate chapter on C++ Data Type Modifier which is given in the next chapter. Let's take an example program.

Characters can store any member of the C++ implementation's basic character set. If a character from this set is stored in a character variable, its value is equivalent to the integer code of that character. An identifier declared as char becomes a character variable. Characters can also be of different types which will discussed in the separate chapter on C++ Data Type Modifier which is given in the next chapter. Let's take an example program demonstrating the use of char type in C++

In C++, char type is often said to be an integer type. It is said so because letters, symbols etc. are represented in memory by associated number codes. It is very easy to code numbers into binary. Thus even letters and symbols are also represented by their associated number codes (e.g., ASCII code), because of which char data type is called another integer type. ASCII code stores number codes for 256 known characters (letters, digits, symbols, nongraphic characters etc.). Following C++ program illustrates char as int type. This C++ program simply display the ASCII code of a character and vice-versa :

Here are the two sample runs of the above C++ program:

An identifier declared as float becomes a floating-point variable and can hold floating-point numbers. Floating point variables represent real numbers, which are used for measurable quantities like distance, area, temperature etc. and typically have a fractional part. Floating-point variables can also be of different types. For detail, follow the separate tutorial on C++ Data Type Modifier which is given in the next chapter. Let's take an example program demonstrating the use of float data type in C++ 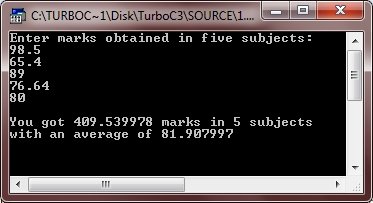 The void type specifies an empty set of values. It is used as the return type for functions that do not return a value. No object of type void may be declared. You can see from the above C++ programs, that the function main() has return type as void. This tells the compiler that the main() function will not return any value.

There are the following rules for assigning data types :

The sizes of variables might be different depending on the computer you are using. Following is the example, which will produce correct size of various data types on your computer.

Using the sizeof() function/operator, you can get the actual size of various data types on various platform. Here is the sample output of the above C++ program.

From the fundamental data types, other types can be derived by using the declaration operators. Here are some of the most important C++ derived data types.

Here are some more examples listed, that you can go for: