Constructors and Destructors are special member functions of a class for initializing and disposing of objects belonging to that class.

C++ provides a well defined mechanism, for initializing an object when it is created, by means of a constructors; same way when an object is no more needed, C++ defines a way to scrap it off, by means of a destructors. There can be multiple variations in these. Let's discuss each one of these in details.

A member function with the same name as its class is called as Constructor and it is used to initialize the objects of that class type with a legal initial value.

A constructor is a member function of a class that is automatically called, when an object is created of that class. It (the constructor) has the same name as that of the class's name and its primary job is to initialize the object to a legal initial value for the class.

If a class has a constructor, each object of that class will be initialized before any use is made of the object. Consider the following class having a constructor :

See the above class has a member function with the same name as its class has and which provides initial values to its data members. Nowforth, whenever an object of the Student type will be created (declared), the compiler will automatically call the constructor Student::Student() for the newly created object.

Note - Constructors and Destructors have no return type, not even void.

A structure or an array in C++ can be initialized at the time of their declaration. For example, consider the following code fragment :

But such initialization does not work for a class because the class members have their associated access specifiers. They might not be available to the outside world (outside their class).

There can be an alternative solution to it. If we define a member function (say init()) inside the class to provide initial values, as it shown below :

See, now that one function (called init()) is there to provide initial values, but still the programmer has to explicitly invoke it, in order to initialize the object. In other words, the responsibility of initialization lies solely with the programmer. What if, the programmer fails to invoke init() ? The object, in such case, is full of garbage and might cause havoc in your program.

Note - A constructor for a class is needed so that the compiler automatically initializes an object as soon as it is created. A class constructor, if defined, is called whenever a program creates an object of that class.

The following code fragment defines a constructor inside the class definition :

This simple constructor (X::X()) is as an inline member function. Constructors can be written as outline functions also as it is shown below :

will create the object Ob1 of type X by invoking the default constructor. But when the constructor accepts some parameters, the initial values must be passed at the time of object creation.

Having a default constructor simply means that an application can declare instances of the class, since C++ requires that whenever an instance of a class is created, its constructor is called.

Tip - If a class has no explicit constructor defined, the compiler will supply a default constructor.

Note - The default constructor provided by the compiler does not do anything specific. It simply allocates memory to data members of object.

This means that you must always specify the arguments whenever you declare an instance (object) of the class. Consider the following code snippet :

Tip - Declaring a constructor with arguments hides the default constructor.

In the above code, for the second statement, the compiler will copy the instance S1 to S2 member by member. If you have not defined a copy constructor, the compiler automatically, creates it and it is public.

The above definition defines two constructors : one parameterized constructor for when initial values are provided and the other a copy constructor to copy data values of a Sample object onto another. These constructors may be used as follows :

But if you given an assignment statement as

it will not invoke the copy constructor. However, if S4 and S1 are objects of same type, this statement is legal and simply assigns values of S1 to S4, member-by-member.

The process of initializing through a copy constructor is known as copy initialization.

Here is an example program illustrating order of constructor invocation 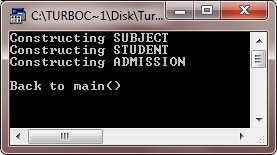 The dynamic initialization means that the initial values may be provided during runtime. Even class objects can be initialized dynamically i.e., with the values provided at runtime.

The benefit of dynamic initialization is that it provides the flexibility of assigning initial values at run time.

Just like any other function, the constructor of a class may also be overloaded so that even with different number and types of initial values, an object may still be initialized. For example, consider the following example program (Following program uses an overloaded constructor) :

Above C++ program will display the following output : 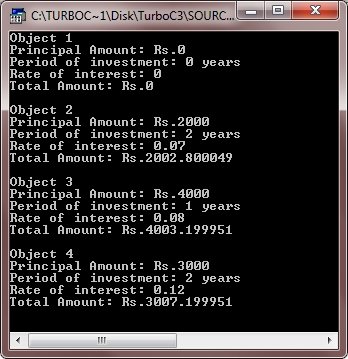 The above program constructs different objects by calling different constructors. Each class has exactly one destructor i.e., to a destructor function can not be overloaded.

Here is the sample output of this C++ program: 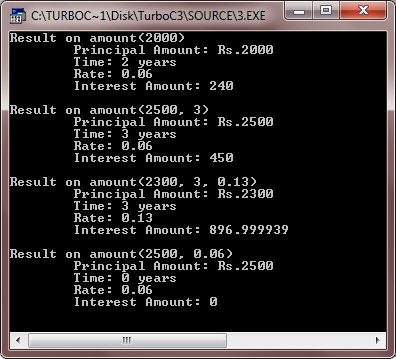 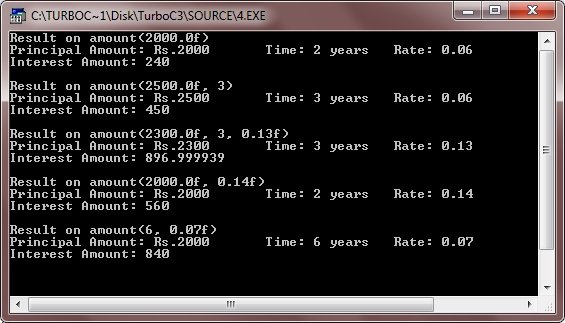 The constructor functions have certain special characteristics. These are :

A destructor is also a member function whose name is the same as the class name but is preceded by tilde('~'). For example, the destructor for the class Sample will bear the name ~Sample().

These allocated resources must be deallocated before the object is destroyed. Now whose responsibility is it ? A destructor volunteers here for this task and performs all clean-up tasks (like closing a file, deallocating and releasing memory area) automatically. Therefore, a destructor is equally useful as a constructor is.

A destructor is a member function and can be defined like any other member function. However, it does not take any argument neither does it return any values.

If you fail to define a destructor for a class, the compiler automatically generates one, the default destructor. If more than one object is being destructed, the destructors are invoked in the reverse order in which the constructors were called.

Note - Generally, a destructor should be defined under the public section of a class, so that its objects can be (used and then) destroyed in any function.

Some Characteristics of Destructors

The destructors have some special characteristics associated. These are :