This post will teach you everything you need to know about classes and objects in C++, an object-oriented feature. So, without further ado, let's get started with the "class" first.

As you already know, a class represents a group of similar objects. A class is a way to bind the data describing an entity and its associated functions together. For instance, consider an account having characteristics such as number, type, and balance. Deposit and withdrawal are two of its associated operations.

The following is the general syntax for creating a class in C++.

The keyword "class" is used to create a class, and "className" is the name of the class that will be created. We define attributes and methods within and outside of the access specifiers "public," "private," and "protected" within the class. As an example:

In the above code fragment, a class named "CodesCracker" is defined, in which an "int" variable named "tot" is defined. And then two methods, namely "printMsg()" and "sum()," are defined in the "public" label.

Class Method's Definition: Outside the scope of the class definition

The functions "printMsg()" and "sum()" in the preceding code fragment are the two member functions of the class "CodesCracker," which are defined in the class definition. However, we can also define the member function of a class later in the program instead of defining it inside the class.

When you create a new class, you're actually creating a template for a new data type. This doesn't specify what data will be used, but it does specify what a class object is and what operations can be applied to it.

When you define a class, you are not defining or creating objects of that class; rather, you are specifying the types of information that the objects of this class type will contain.

The object of any class is declared in the same way that the basic type variables are declared. For example, the following statement declares an object of the class "CodesCracker" named "obj."

Accessing the data members of the class in C++

Using the "dot (.)" operator, the variable (object) "obj" can now access all of the attributes and methods of the class "CodesCracker" as follows:

The preceding statement called the method "printMsg()" from the class "CodesCracker." Outside of the class, attributes and members of the "PRIVATE" label are inaccessible.

Now is the time to look at an example to gain a better understanding of C++ classes and objects.

This program's output should be exactly:

Let me now walk you through the above program step by step:

Here is a practical example program demonstrating the concept of classes and objects in C++.

The following snapshot depicts the above program's initial output:

Now supply the inputs for five items; for example, type "1001" as an item code and hit the ENTER key, then type "430" as its price and hit the ENTER key again. Now supply the data for item number two: say "1002" as the item code and "455" as its price. In this way, supply item codes and their prices for five items. The following snapshot shows the sample run: 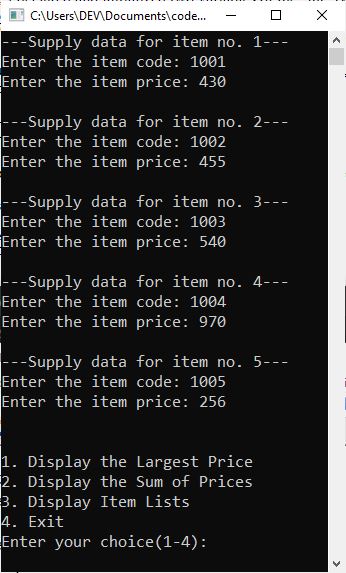 You can now enter "1" and press the ENTER key to display the highest price, or enter 2, 3, or 4 to display the sum of prices, item lists, or exit the program. Please take a look at the image below:

You can type "4" and hit the ENTER key to exit the program.

In the preceding program, I created an object "order" of the type "ITEM" (class) and used it to call the "initialize()" method, which receives five item codes and their prices, which are stored in the "itemcode" and "itprice" variables. Then I used the "do-while" loop to show the user the menu so they could select the appropriate option to get the desired result on the output console.

That is, when the user enters "1" as an option and presses the ENTER key, the class "ITEM"'s member function named "largest()" is invoked via its object "order." And this function will find the highest price among all five items' prices. If the user selects "2" or "3," I called the other two methods "sum()" and "displayitems()" in a similar manner.

When you need to use the value of the global variable instead of the local one, then you can use the scope resolution (::) operator. For example:

In C++, you can make an array of objects. As an example, consider the following program:

The following snapshot shows the sample run of the above program with user inputs of 10, 20, 40, 56, and 87 as five number inputs. 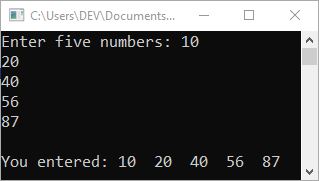