Of these, you may use return and goto anywhere in the program whereas break and continue are used inside smallest enclosings like loops etc. In addition to the above four, C++ provides a standard library function exit() that helps you break out of a program.

The return statement is used to return from a function. Now let's discuss in details.

Here is the syntax of the goto statement in C++:

where label is a user supplied identifier and can appear either before or after goto. For example, the following code fragment :

A label may not immediately precede a closing right brace. For example, the following code fragment is wrong :

To handle this constraint, a null statement may be used that follows the label as shown below :

Tip - If a label appears just before a closing brace, a null statement must follow the label.

The break statement enables a program to skip over part of the code. A break statement terminates the smallest enclosing while, do-while, for, or switch statement. Execution resumes at the statement immediately following the body of the terminated statement.

The following code fragment gives you an example of a break statement :

The above code fragment inputs two numbers. If the number b is zero, the loop immediately terminated otherwise the numbers are repeated input and their quotients are displayed.

If a break statement appears in a nested-loop structure, then it causes an exit from only the very loop it appears in. For example :

The above code fragment inputs a character and prints it 10 times. The inner loop has an infinite loop structure but the break statement terminates it as soon as j becomes 10 and the control comes to the statement following the inner loop which prints a line of dashes.

A break used in switch statement will affect only that switch i.e., It will terminate only the very switch it appears in. It does not affect any loop the switch happens to be in.

The continue is another jump statement like the break statement as both the statements skip over a part of the code. But the continue statement is somewhat different from break. Instead of forcing termination, it forces the next iteration of the loop to take place, skipping any code between.

For the for loop, continue causes the next iteration by updating the variable and then causing the test-expression's evaluation. For the while and do-while loops, the program control passes to the conditional tests.

Note - The continue statement skips the rest of the loop statements and causes the next iteration of the loop.

The following code fragment gives you an example of continue statement :

Sometimes you need to abandon iteration of a loop prematurely. Both the statements break and continue can help in that but in different situations.

Tip - Do not confuse the break (exits the block) and continue (exits the remaining statement(s) ) statements.

A break statement inside a loop will abort the loop and transfer control to the statement following the loop. A continue statement will just abandon the current iteration and let the loop start the next iteration.

Following example program uses two loops to perform the same thing, but replaces break statement with continue. Have a look at one code and then the output to understand the difference between break and continue statements :

When the C++ program is compile and executed, it will produce the following output : 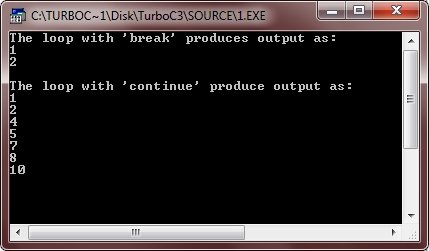 When the above C++ program is compile and executed, it will produce the following output:

The exit() function as such does not have any return value. Its argument, which is 0 in the above program, is returned to the operating system. This value can be tested in batch files where ERROR LEVEL gives you the return value provided by exit() function. Generally, the value 0 signifies a successful termination and any other number indicates some error.