Every file keeps track of two pointers, which are referred to as get_pointer (in the input mode file) and put_pointer (in the output mode file). These pointers indicate the current position in the file where reading or writing will take place. (A file pointer in this context is not the same as a pointer in C++; rather, it functions in the same way as a book-mark would.) These pointers make it possible to access files in a random order. That means skipping the step where you move through the file in a specific order and going straight to the location you want in the file.

There may be situations where random access is the best choice. For example, if you have to modify a value in record no. 21, then using random access techniques, you can place the file pointer at the beginning of record no. 21 and then straight-way process the record. If sequential access is used, then you'll have to unnecessarily go through the first twenty records in order to reach record 21.

When seekg() or seekp() is used according to Form 1, it moves the get_pointer or put_pointer to an absolute position. Here is an example:

When the seekg() or seekp() function is used according to Form 2, it moves the get_pointer or put_pointer to a position relative to the current position, following the definition of seek_dir. Since seek_dir is an enumeration defined in the header file iostream, it has the following values:

Here is an example.

The functions tellg() and tellp() return the position, in terms of a byte number, of put_pointer and get_pointer, respectively, in an output file and an input file.

Here is an example of a C++ program that uses file pointers and random access to show how they work:

Before showing you the output produced by the above program, let me tell you that I already created the "william.txt" file in my current directory (the directory where the C++ source code is saved). The following snapshot is included for your understanding: 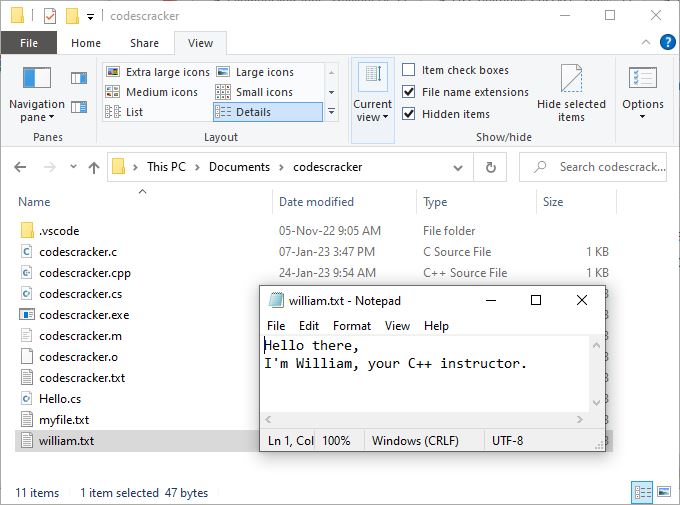 As you can see, I also wrote two lines of text inside the file "william.txt." Now see the following output produced by the preceding example program illustrating the file pointer and random access in C++. 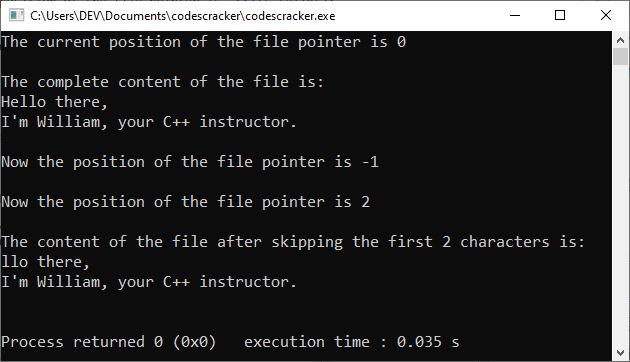 In the above program, you can consider "ifs" as the file pointer for the file "william.txt." and using the following statement:

I begin by attempting to clear any fail bits, such as the end-of-file bit, if there are any, before using the following statement: