In this article, you will learn and get code on finding arithmetic of all the numbers entered by user in C++. User is also allowed to define the size. For example, if user enters 5 as the size, then program further asks to enter any 5 numbers to find arithmetic mean. There are two programs available here:

How to Find Arithmetic Mean ?

If there are n set of numbers, therefore to find arithmetic mean, we have a formula:

Now let's move on to the program.

To calculate (or find) arithmetic mean (of numbers) in C++ programming, you have to ask from user to enter the size (how many set of number), then ask to enter all numbers of that size to find and print arithmetic mean.

Now enter the size, that is how many numbers you want to enter find the arithmetic mean. Let's suppose, user enters the size as 5 and 5 numbers as 10, 2, 4, 6, 12. Press ENTER key to see the following output: 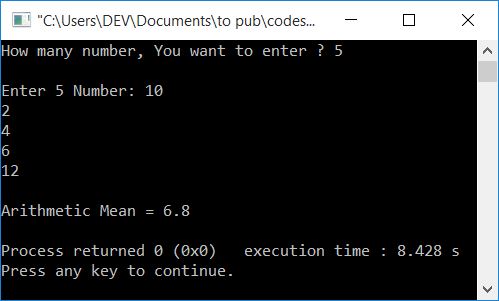 This function does the same job as of previous program. But it is created using function. That is, a function arithmeticMean() takes two arguments, the first one is the array, and second is the size. And returns the arithmetic mean of all numbers stored in the array. To lean more about function in C++, you can follow the separate tutorial on it.