C++ Program to Append Data in a File

This article is created to provide you the program in C++ that appends some data in a file. Here both data and file must be entered by user at run-time. Appending data in a file means, adding new data in a file without erasing previous one.

What to Do before Program ?

As you can see from above snapshot, the file named codescracker.txt is available. That is created by me, right now. Let's put some content inside it. Here is the snapshot of the opened file, after writing some data manually, inside the file: 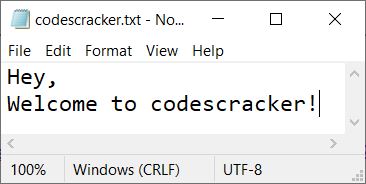 Since I've a file with some data already available in it. Therefore, now let's move on and create a program in C++ that appends some new data entered by user at run-time to this file, using a C++ program.

Append Data in a File

The question is, write a program in C++ that receives the name of file and data, to append the given data inside the given file. The answer to this question is the program given below:

The snapshot given below shows the initial output produced by above C++ program on appending data in a file:

Now provide the name of the file that was created earlier, that is codescracker.txt and then enter some data say:

That is, first type The first, then press ENTER key, again type text to and again press ENTER key, finally type append. and hit the ENTER key two times to stop entering further data and append the complete data entered, in the file codescracker.txt like shown in the snapshot given below. Here is its sample run with exactly same inputs:

Now if you see the same file, codescracker.txt, then you'll found that the above entered texts/data gets appended. Here is the new snapshot of the opened file: 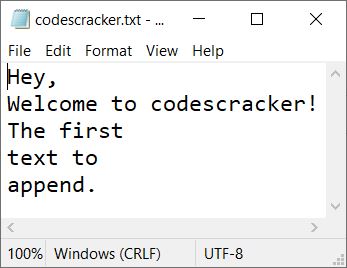 Note - The fstream header file is included to use its class fstream, to handle with file stream.

Note - The fstream is a stream class used for both read and write purpose.

Note - The fstream::app is used to open the file in appending mode.

Here is its sample run with user inputs, codescracker.txt as name of file, and:

as data to append, and y as choice: 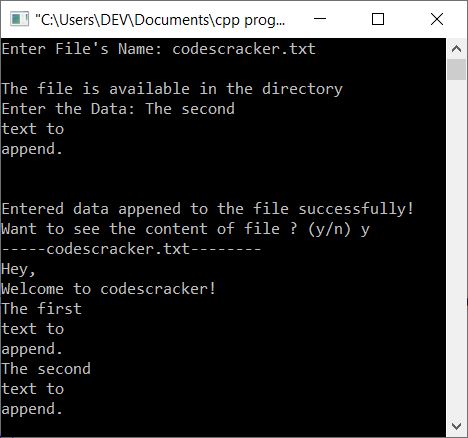 And here is the new snapshot of the opened file, codescracker.txt: 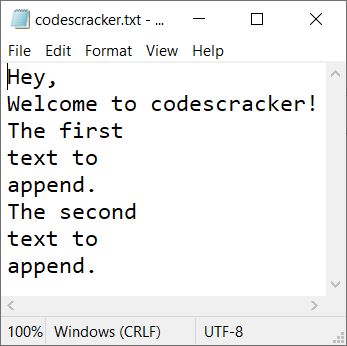 As you can see from the above program and its sample run, user is able to see the on-going process as well as the content of file (if he/she wants) after appending new data in the file. That is, basically user need not to go inside the directory and open the file manually to see its new content after appending, as this is done using the program itself.