The while loop is the most fundamental loop statement of Java. It repeats a statement or block while its controlling expression is true. Here is the general form of while loop in Java:

The condition can be any Boolean expression. The body of the loop will be executed as long as the conditional expression is true. When the condition becomes false, the control passes to the next line of code immediately following the loop. The curly braces are unnecessary if only a single statement is being repeated.

Following is a while loop that counts down from 10, printing exactly 10 lines of "tick" : 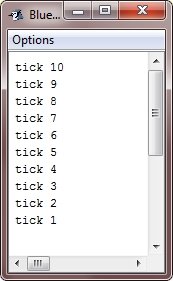 Since the while loop evaluates its conditional expression at the top of the loop, the body of the loop will not execute even once if the condition is false to begin with. For example, in the following code fragment, the call to println() is never executed:

The body of the while loop can be empty. This is because a null statement (once that consists only of a semicolon) is syntactically valid in Java. For example, consider the following program:

The value of i is incremented, and the value of j is decremented. These values are then compared with one another. If the new value of i is still less than the new value of j, then the loop repeats. If i is equal to or greater than j, the loop stops. Upon exit from the loop, i will hold a value that is midway between the original values of i and j. (Of course, this procedure only works when i is less than j to begin with.) As you can see, there is no need for a loop body, all of the action occurs within the conditional expression, itself. In professionally written Java code, short loops are frequently coded without bodies when the controlling expression can handle all of the details itself.