In Java, a method is a collection of statements which are grouped together to perform an operation. Java gives methods, so much power and flexibility.

Following is the general form to create a method:

Here, type specifies any valid data type (including class types that you create) returned by the method.

If the method does not return a value, its return type must be void.

The name of the method is determined by name. This can be any legal identifier other than those already used by the other items within the current scope.

The parameter-list is a sequence of type and identifier pairs separated by commas. Parameters are essentially the variables that receive the value of the arguments passed to the method when it is called. The parameter list will be empty if the method has no parameter.

Methods that have a return type other than void will return a value to the calling routine using the following form of the return statement :

Here, value is the value returned.

Even though it is perfectly fine to create a class that contains only data, it rarely happens. Most of time, you will use methods to access the instance variables which are defined by the class. In fact, methods define the interface of most classes. This provides the class implementor to hide the specific layout of the internal data structures behind clearer method abstractions. In addition to defining the methods which provides access to the data, you can also define methods which are used internally by the class itself.

Now let's begin by adding a method to Box class as already discussed. It may have occurred to you while looking at the previous example programs that the computation of the volume of a box was something that was best handled by the Box class instead than the BoxDemo class. After all, since the volume of the box is dependent upon the size of the box, it makes signified to have the Box class compute it. To do this, you must add a method to the Box, as shown below : 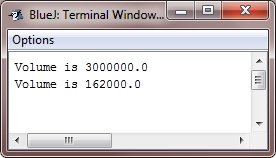 Now, look closely at the following two lines of code :

If you are unknown with the concept of calling a method, the following discussion will help clear things up:
When mybox1.volume() is executed, then the Java run-time system transfers the control to the code defined inside the method volume(). After the statements inside method volume() have executed, control is returned to the calling routine, and the execution resumes with the line of code following the call. In general sense, a method is Java's way of implementing the subroutines.

There is something very important to notice inside the volume() method i.e., the instance variables depth, width, and height are referred to directly, without preceding them with object name or the dot (.) operator. When a method uses instance variable i.e., defined by its class, it does so directly, without explicit reference to an object and without the use of the dot (.) operator. This is simple to understand if you think about it. A method is always invokes relative to some object of its class. When this invocation has occurred, the object is known. Therefore, within a method, there is no need to specify the object, second time. This means that width, height, and depth inside the volume() implicitly refer to the copies of those variables which are found in the object that invokes volume().